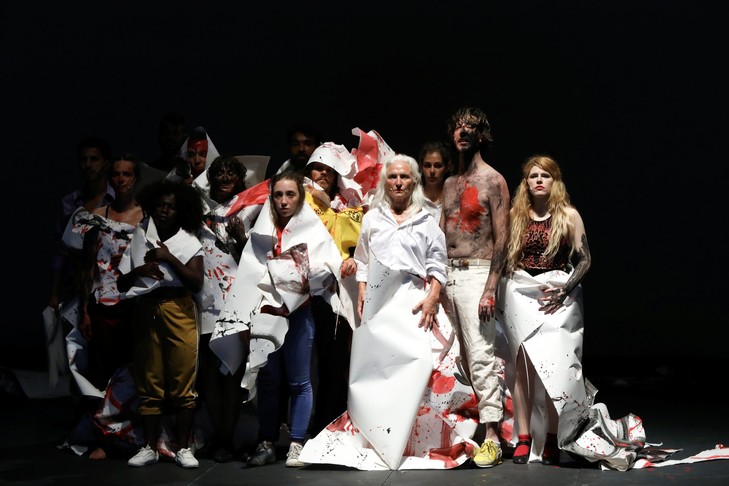 We, Europe. Banquet of Peoples

Who would have thought that a spectacle of nearly three hours on the construction of Europe would make the public rise and dance in Avignon? Laurent Gaudé and Roland Auzet can boast of having taken up the challenge with We Europe. Banquet of Peoples (1), the first of which, Saturday, July 6, was applauded by an electrified audience.

Reaffirming with panache the theater as agora, and the spectators as citizens, this historic fresco, political and poetic, would have had its place in the courtyard of the Papal Palace. She would probably have opened this 73e edition of the festival with more energy than the ambitious but too long Architecture from Pascal Rambert … (read The cross of July 8, 2019).

At the table of Europe with Laurent Gaudé

They are eleven actors on stage, of all ages, from all backgrounds – French, German, Italian, Polish, or Irish. They are pro- or anti-European, when they are not simply indifferent to the fate of an entity that seems far from their daily lives, obscure in its operation, impotent or even cynical in the face of the influx of migrants knocking on its doors …

A palimpsest of hopes and disappointments

The discussion opens as the history of the Old Continent takes shape, from 1848 to the present day. Wars, treaties, pogroms, colonizations, revolts appear in places and dates on a large whiteboard, a palimpsest of hopes and disillusions.

Everyone presents their point of view. There are those who fear that the dislocation of Europe is synonymous with «Back to the Paleolithic», opening the way for the monsters we had so ardently promised to fight. Those who are convinced that it is time to end what is little more than an economic alliance, far from the communion of values ​​proclaimed. Those who still refuse that the fear of populism, of terrorism, is the only cement of the union of peoples. So many "I" individuals who are gradually tamed to imagine a "us" collective, which would not be suffered but desired and carried high …

A visual and dynamic staging

Make no mistake: if Laurent Gaudé and Roland Auzet's attachment to Europe is not in doubt, this "banquet of peoples" is not a blind plea but a debate. Before explaining the reasons for believing it still, he gives to understand those which weakened it, with all the finesse of analysis and the poetic breath vibrating under the pen of Laurent Gaudé.

In his book, more essay than dramatic text, the director and composer Roland Auzet orchestrates an extremely visual and dynamic staging, punctuated by a chorus of amateurs and the mixed song of European languages, sweet music awakening hope.

The historical narrative also responds to more incarnate scenes, like this young Moroccan (Mounir Margoum) undergoing the muscular interrogation of an official of the French Office for the Protection of Refugees and Stateless Persons (Ofpra), played by the fascinating Olwen Fouéré.

Exorcise the ghosts of the past

The pitfall of the partisan conference is thus skilfully avoided, except this evening of the intervention "surprise" François Hollande who has embarrassed even annoyed some of the audience (2). By offering him this platform, certainly full of self-deprecation, the two artists contradicted the very spirit of their project and hijacked the public, who did not know they were invited to a meeting of the former president …

In Avignon, the show still alive and well

Apart from this misplaced passage, everything suggests that We Europe, which will launch on July 18 in a tour of more than eight months, will be a milestone. As well as the punk and boosted songs of German Karoline Rose, which sound like outlets. A way to exorcise the ghosts of the past to look forward. Europe of yesterday is dead, long live the Europe of tomorrow!

1999. Sign his first play, Fights of possessed, published by Actes Sud as all his work to come.

2011. Directs Thousand orphans, of Laurent Gaudé, with André Wilms and the Master of Radio France.

2015. In the solitude of the cotton fields, Bernard-Marie Koltès, with Anne Alvaro and Audrey Bonnet.

2018. Listen to our defeats – END, according to Laurent Gaudé's novel, with Gabriel Arcand and Thibault Vinçon.

The type of manhood and intercourse will involve the Bohemians, in verses and singing

Vargas Llosa, first Nobel in the list of Francisco Umbral