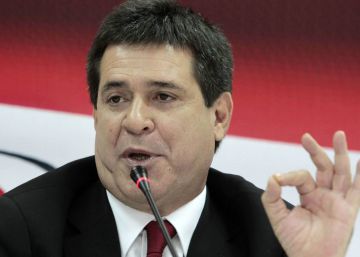 The former president of Paraguay Horacio Cartes is white, Tuesday, of an arrest warrant issued by Judge Marcelo Bretas, in charge of the operation Lava Jato in the State of Rio de Janeiro. The investigation targets people allegedly linked to Dario Messer, detained in São Paulo since last June as the alleged leader of a gigantic money laundering network. Cartes received the news at his home in Asunción, where several related politicians visited him on Tuesday, according to the Paraguayan press.

Cartes commanded Paraguay between August 2013 and August 2018. Today he is suspected of hiding part of his millionaire heritage through Messer, a key Brazilian in the investigation Lava Jato. Federal Police said in a statement that it found about 20 million dollars (84 million reais) of Letters allegedly hidden by the network, of which more than 17 million are in an account in Bahamas. The remaining money is distributed "in Paraguay between doleiros (money launderers), currency exchange bureaus, businessmen, politicians and a lawyer, "according to the police note.

So far, the arrest warrant for Brazil against Cartes has not arrived in Paraguay through the Interpol service, the head of this police agency in Asunción, Commissioner Wilberto Sánchez, told EL PAÍS. "So far there is no red notification," said the police chief.

The Brazilian Federal Police issued 37 court orders for preventive detention on Tuesday in Rio de Janeiro, São Paulo and in the city of Ponta Porã, on the border with Paraguay. The inclusion of Cartes and other residents of Paraguay and the United States in the order issued by Bretas was sent to Interpol. Among those pointed out by Brazilian justice is also Messer's girlfriend, Myra de Oliveira Athayde, detained in a wealthy neighborhood of Rio de Janeiro.

Brazilian Justice investigates Dario Messer since the 1990s. In 2014, Messer moved to Paraguay, just when the Lava Jato operation began. He bought a house there and then obtained Paraguayan citizenship. In May 2018, the justice requested his arrest as the alleged coordinator of an asset laundering scheme that moved $ 1.6 billion in 52 countries. On that occasion he managed to flee, but was finally captured in July this year.

Cartes, on the other hand, has been questioned since the beginning of his presidential race for investigations into alleged irregularities in his billionaire heritage, which includes one of the three large media conglomerates of Paraguay. During his Government, newspapers, radios and television channels passed to his sister, Sarah Cartes. “We were waiting for this news since we began to investigate in Brazil. What the judges did not do in Paraguay, Brazilians are doing today, ”says Efraín Alegre, president of the Liberal Party, the main opponent of the Colorado Party of Letters.

Cartes founded a currency exchange house called Amambay. During his Government, that project became the Amambay Bank and after the end of his presidency he changed the name to Banco Basa. The president of the company, Eduardo Campos, spoke today in defense of his boss: “It is surprising considering that I had a conversation with Mr. Horacio (Cartes) this morning and there is not even a phone call, a contact or a meeting with Darío Messer ”, according to the Paraguayan newspaper The nation, owned by the Cartes business group.

“Horacio Cartes has a clear conscience,” added the president of the Basa bank. The same newspaper also quoted Cartes's lawyer, Carlos Palacios, who says that the former president “has neither had nor had commercial or business ties with Messer. They are not business partners, and we do not know what the complaint was that the judge had. ”

Messer, a "brother of the soul"

The connection between former president Cartes and the Messer family has a long tradition. The Paraguayan politician is an old acquaintance of Dario's father, Mordko Messer. During the Jewish World Congress in Buenos Aires, held in March 2016, Cartes said he had been welcomed by Mordko, whom he called "second father", at a difficult time in his life.

“God placed in my path a family and a great person, who welcomed me into their hearts and feelings, and made me feel part of the family. They helped me and taught me fundamental things. They won my eternal love of son, my gratitude and admiration, ”said the former president that time. In an interview with the local newspaper Last minute, the Paraguayan also referred to Dario Messer as a "soul brother".

Messer even participated in an official trip from Cartes to Israel in 2013. In addition, he owns a property in the exclusive Paraná Country Club, in the city of Hernandarias, where a flat is worth more than $ 200,000 and a house reaches one million . According to the newspaper ABC Color, Cartes amended decrees in 2017 "to benefit its 'brother Darío ". Among them, the order to veto a project that declared the Paraná Club land nature reserve.

Cartes does not hold any public office, but not for lack of will. When the end of his mandate approached he tried to modify the Constitution to be a candidate again, but the opposition within his own Colorado Party and the Liberal Party prevented him from mass protests that ended in the burning of the Paraguayan Congress.

After that skirmish, Cartes tried to present himself as a candidate for the Senate, again contradicting the Constitution, which only allows him to be a life senator, a position without real power or parliamentary privileges. Finally, the rest of the congressmen prevented it. “Cartes has no privileges, what he does have is many friends in Congress, more than friends, accomplices who will try to rescue and save him. Hopefully not try to seek more impunity through illegal mechanisms, ”said Alegre.

Animals in Australia get food from the air

Flights of Serbia-Kosovo to Return Under Deal U.-Brokered