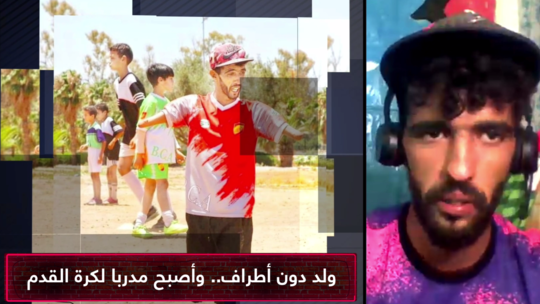 Moroccan young man Abdel Khaleq Al-Wardi expressed the challenges he faced in the field of football training due to the loss of his four limbs since his birth, stressing his unwillingness to install prosthetic limbs.

His friends call him the “miracle coach”, after he managed to withstand the challenges and train youth football with the “Rajaa Bin Jarir” club.

Moroccan coach Abdel-Khaleq Al-Wardi shared his inspiring story during his meeting with the journalist Ahmed El-Gamal on the Nas Online program.

He explained that when he was seven years old he used to play football with the children in his village and was a goalkeeper, but with his age he watched the children playing and then gave them advice on their playing style.

Al-Wardi added that he had no desire to install prosthetic limbs, saying: “I was offered to install artificial limbs, but I did not think about it, because I do not feel that I am disabled and I have no problems in my life. On the contrary, I learned a lot from all the difficulties and I want my life as it is.”

Covid vaccines: the story of a woman who was anti-vaccine – Health