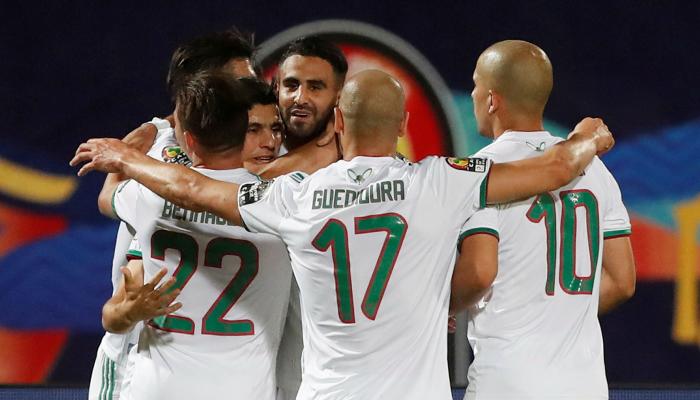 Algeria, the defending champion, hopes to make up for its humble beginnings when it meets Equatorial Guinea on Sunday in the African Nations Cup, while Tunisia, wounded in Corona, hopes to compensate for its loss against Mali, which witnessed an arbitration scandal.
Despite the disappointing goalless draw against Sierra Leone, the “Desert Warriors” raised their series to 35 games in a row without losing, a record for an African team, two games behind the world record for Italy (37), as they began this amazing series by beating hosts Togo 4-1 in November 2018.
Algeria, led by Manchester City star Riyad Mahrez and the talented Youssef Belaili, was considered the most prominent candidate to retain its title before the start of the 33rd edition of the continental championship, but its group is currently led by the strong Ivory Coast after its victory over Equatorial Guinea with a wonderful goal from Max Allan-Gradil, knowing that the champion and runner-up of each Two groups qualify for the Round of 16, with the four best teams occupying third place.
Before facing Sierra Leone, Ivory Coast player Serge Aurier confirmed that the “elephants” team will try to “resolve qualification in the second round, and then face Algeria in the third round in a big and festive meeting,” noting that each team that reaches the sixth point will guarantee its qualification.
With the necessity of defeating Equatorial Guinea before the summit match against Ivory Coast at the end of its group stage campaign, Algeria coach Djamel Belmadi expressed his confidence in his strikers, Baghdad Bounedjah and Islam Slimani.
“I have a lot of confidence in Bounedjah, despite his fast on scoring, and in Soleimani. I do not ask the strikers to score only, but to focus and deal with the pressure of the matches, and sometimes the striker does all the work required of him but does not score, but with work and confidence in himself, the striker overcomes,” he said at a press conference. any problem.”
Belmadi, who led his country to the 2019 title in Egypt after the first in 1990, revealed the absence of his players Adam, Nas and Ramez Razouki due to illness.
Regarding the bad terrain of the Jaboma stadium in Douala, he added, “We have to deal with the field’s surface. I do not say that it is catastrophic, but a competition the size of the African Cup requires better ground, and there are stadiums in Cameroon with good ground compared to the Jaboma stadium.”

Tunisia after the scandal

Tunisia faces one obstacle after another. After an arbitration scandal in its opening match, which it lost against Mali, it will face Sunday against Mauritania after six of its players were infected with the Corona virus.
On Friday, the Tunisian Federation announced that 22 players attended the exercises, “where Osama Al-Hadadi, Naim Al-Saliti, Yohan Tozgar, Muhammad Dragher, Issam Al-Jabali and Dylan Brun were isolated after they were confirmed to be infected with the Corona virus.”
Al-Saliti and Brune were key players and Tozgarh was a substitute in the Mali match, in which captain Wahbi Khazri missed a penalty kick.
“The Mauritania match will not be easy in such difficult circumstances,” said Tunisian player Bilal Al-Aifa. “We must remain focused and present. We know Mauritania’s strengths and weaknesses.”
The confrontation of Tunisia and Mali witnessed a strange incident and a controversial end when the Zambian referee, Jani Zikazui, blew the final whistle in the 89:42 minute before the end of the original time, knowing that it is self-evident and it is expected that there will be time instead of lost, amid strong objection from the technical staff and the Tunisian team players . However, the ruling did not appeal.
This end angered the Tunisian technical staff and the players, and coach Munther Al-Kabeer approached the referee, pointing to his watch, and telling him that the time had not yet ended, but to no avail, before the refereeing staff came out with a security escort.
Minutes after the players entered the dressing room, one of the main referee’s assistants returned and the two teams were called again to the field to complete the confrontation, and while the Mali players returned, their Tunisian counterparts did not return.
On Thursday, the Confederation of African Football announced the rejection of the Tunisian team’s protest against the end of its match, “After reviewing Tunisia’s protest and the report of all match officials, the organizing committee decided to reject the Tunisian team’s protest and adopt the match result 1-0 in favor of Mali.”
While coach Munther Al-Kabeer revealed the readiness of midfielder Youssef Msakni after recovering from the co-Corona virus, the player Ghilan Al-Shaalali said, “We forgot the Mali match, everyone is focused and knows what awaits him in the Mauritania match. I wish a speedy recovery for those infected with the Corona virus.”
Tunisia, the 2004 champion and 1996 runner-up, is participating for the 20th time in the finals.
In the pre-match press conference, striker Seif El-Din Jaziri, top scorer in the last Arab Cup in Qatar when Tunisia was runner-up to Algeria, said, “We left our families for this tournament. We are here to make up for this sacrifice. I was the top scorer in the Arab Cup, but we are now in the African Cup, which means a lot me and my team.”
On the other hand, the Mauritanian team will participate for the second time in its history after 2019 in Egypt and bid farewell to it from the group stage after a draw with Tunisia in particular and Angola and a loss against Mali.
The “Al-Mourabitoun” players had a negative tinge, with French coach Didier Gomez hoping to compensate for the opening loss.
Newcomer Gambia and Mali lead the standings with three points, and they meet in Limbe before the match between Tunisia and Mauritania, which will be held on the same stadium, and if any team wins its sixth point, it will ensure that it reaches the round of 16.