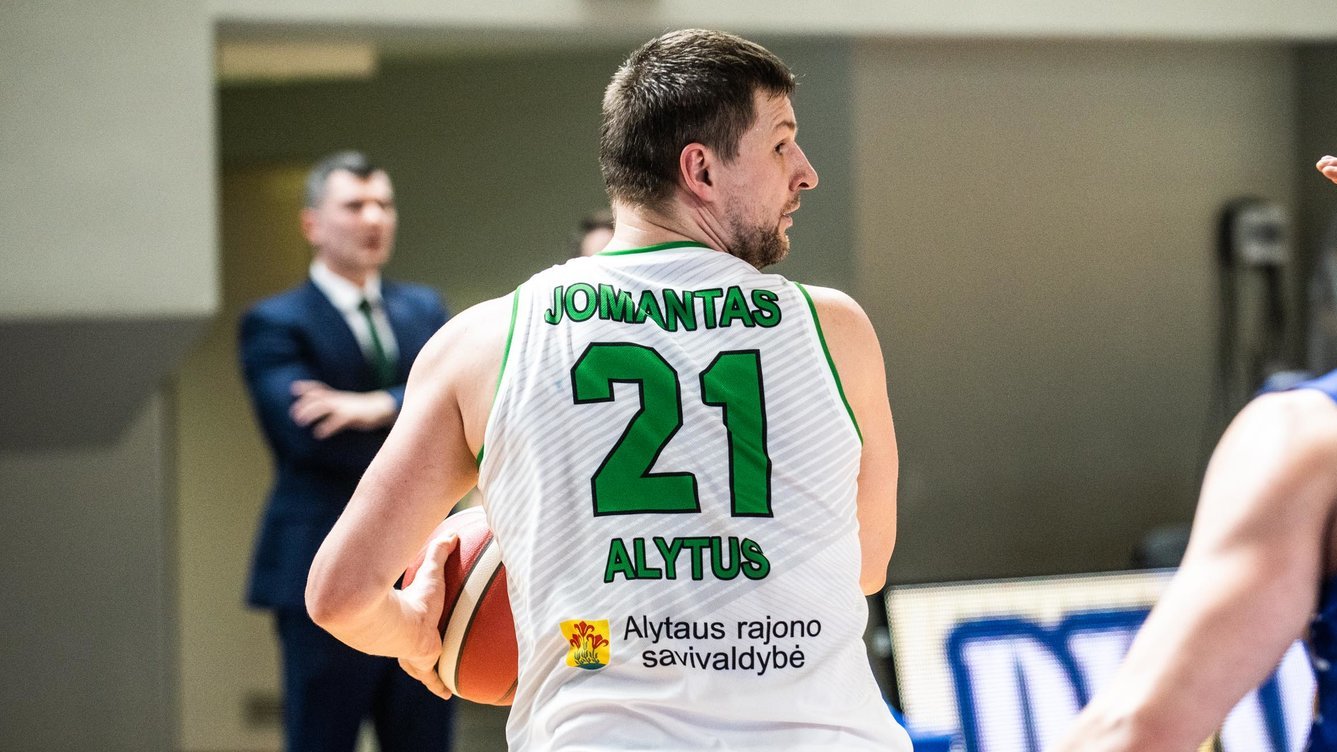 52 seconds – both lasted this season Artūras Jomantas performance on the field in the Lithuanian Basketball League (Betsafe-LKL).

The striker played his first match on October 11 against Kėdainiai “Nevėžis-Optibet”, but he faced a recurring injury and dropped out again for more than a month.

Still, Alytus “Dzūkija” has finally received good news – the veteran is already returning to team training and plans to run on the parquet soon.

“I start playing sports with the team and I will watch how my foot feels. There is now a FIBA ​​”window”, there was no point in forcing the situation, so I hope I have fully recovered. Because once I was in a hurry to come back “, A.Jomantas regretted while talking to LKL.lt.

The 36-year-old striker, 200 cm tall, admits that after a while he really hurried back to the parquet. Despite a long experience and knowledge of his body, this happened out of a strong desire to play basketball again.

“If I stayed on the field for 52 seconds and the injury on the first sprint recurred, I mean, I hurried. I really wanted to come back, I thought I could, but it was as it was, ”he says.

The striker is looking forward to playing again, as it is extremely difficult for a basketball player famous for fighting from the side.

“It’s very hard even when you’re sitting with your mask on. The team fails to read from the lips what you are shouting, well that the sound is (Laughs). Comparing the relegation at the beginning of the season and now, the last stage is more difficult for me, because I know that if I had waited another week, I believe that everything would be fine, ”says A. Jomantas.

So far, the Alytus team is experiencing a really solid start in the Betsafe-LKL championship. He won 4 victories in nine matches, while Citadele KMT won 3 of the six matches in Group B.

“I am in no hurry to return so as not to ruin such a game (Laughs). It is important that the team is free of injuries, but we also do not have young people, they cannot pull so much, we need to share time, ”he emphasizes.

Two members of Dzūkija compete a lot: Justas Furmanavičius – even 37 minutes, and the chief player of the league Mindaugas Lukauskis – 34. By the way, they are both leading in this category in the Betsafe-LKL championship.

“Of course, it is difficult for them, but everyone understands the situation and so on,” says A. Komantas.

Adamas Lapeta, a former member of this team, has returned to Alytus this season, for the fourth year in Dzūkija. The attacker describes him as completely his own in Lithuania.

“It simply came to our notice then. Adamas has a good character, he has been playing in Alytus for many seasons, he didn’t have to explain much, he knows a lot better than some other Lithuanians, ”smiles A. Jomantas.

However, an experienced player is not in a hurry to enjoy a good start to the team – everything will be in front of his eyes and a good effort will be needed to maintain a good curve.

“So far, only the first round has passed. If you play badly later, these good results will be forgotten. We will be able to talk about this in the spring, after three laps. As far as it’s been that you get off to a good start, but the bad stage comes and nothing good again. Tfu tfu tfu, if someone were injured, things could change. Four victories are better than zero, but this is only the beginning of the season, ”A. Jomantas told LKL.lt website.

What other reserves does Dzūkija have? The veteran answers this question wittily. “It simply came to our notice then. Either a reserve, or an anchor. We will see you live, “he laughed.

Bruz and Pulkowski podcast: answers to questions. Click and see >>

Border Guard: There are about 10,000 in Belarus foreigners who plan to cross the border illegally

Saad Al-Sagheer asks the flight attendant for a strange request.. Look what he said