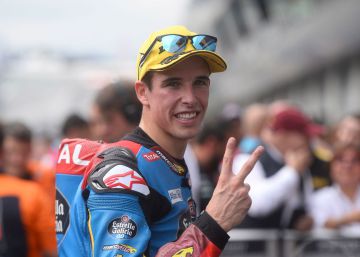 Alex Márquez is going to stay another year in Moto2 after extending his link with the Estrella Galicia-MarcVDS team. The pilot and the team confirmed by means of a statement the renewal of the contract for the 2020 season, an agreement that ends in a stroke with speculation about the jump to MotoGP of the little one of the Márquez. The rider leads the provisional classification of the Moto2 World Cup with 43 margin points over Thomas Luthi and is the main favorite to achieve the championship, an almost obligatory previous step before opposing the queen category. But, not even if the title is awarded, Alex Márquez will ride on a MotoGP next year. The pilot has pointed out that by extending his presence in the intermediate category he intends to lay a better foundation in his training: “I will be able to continue, one more year, improving as a pilot, raising my level of piloting and preparing myself to fulfill my dream of making the jump to MotoGP” .

The future of Alex Márquez has been the subject of debate in the World Cup boxes, and even his brother Marc, five-time MotoGP champion and leading leader of the classification, had pointed out that to have real options to make the leap, Alex had to be Moto2 champion. But, for now, the meeting of the two Márquez in MotoGP will have to wait. Alex recently said in an interview with Motorsport that "being Marc's brother harms more than benefits." The pilot's statements coincided with the negotiations to secure a motorcycle for next season, and with the obstacles he found to seal an agreement with the Petronas-Sprinta team. Márquez and his representative, Emilio Alzamora, maintained contacts with the structure that sponsors the Malaysian oil company to run a season with his Moto2 team, with the commitment, in 2021, to jump to the Yamaha-Petronas of MotoGP. On the Yamaha satellite team, Fabio Quartararo and Franco Morbidelli now militate, but it is not unreasonable for the French to go to the official team in 2021, coinciding with the withdrawal of Valentino Rossi. The three-way play was paralyzed by Yamaha's refusal to accept a commitment to incorporate a pilot within a year and a half, and more so if that pilot is named Marquez.

The situation that Alex Márquez lives is a reflection of the traffic jam in the MotoGP boxes, where there are hardly any free bikes. Only the unexpected resignation of Johann Zarco to follow in the official KTM team and the surprising statements of Jack Miller, pointing out that Pramac Ducati is reluctant to renew the contract and that Jorge Lorenzo was bidding for his place in the team, have shaken the grid. In the case of KTM, Dani Pedrosa, tester of the brand, has sounded as a possible substitute for Zarco, but the Catalan driver, who retired in 2018, has shown little desire to return to compete.