“Since PPF has committed itself to making a mandatory takeover bid for 80 crowns per share after acquiring a majority, I expect the share price to oscillate around this value. If the transaction were to end, the share price would probably fall briefly, but far from below 70 crowns, where it was at the end of January, when PPF announced its intention, “says Cyrrus economist Tomáš Pfeiler. According to him, such strong declines would probably trigger a wave of interest from speculative funds, which would buy shares from the market with the intention of resale to the PPF group.

In general, however, the central bank’s policy should wish for Moneta securities. “At the level of 80 crowns, Moneta’s shares will probably not stop and will continue to rise in price when the banking sector starts playing cards raising interest rates in the economy, which will come with economic recovery,” adds BH Securities economist Štěpán Křeček.

On Thursday, after the market closed, Moneta Money Bank announced a framework agreement with PPF Group companies for the acquisition of Air Bank, the Czech and Slovak Home Credit and Benxy. According to Bloomberg, analysts target the share price at the one-year horizon at 93 crowns, which would mean exactly 20% annual growth.

At the same time, the potential increased just on the eve of the announcement of the transaction, when the shares weakened sharply. Some of Moneta Money Bank’s shareholders were said to be intimidated by the looming transaction, which they assessed as unfavorable, and decided to sell it. 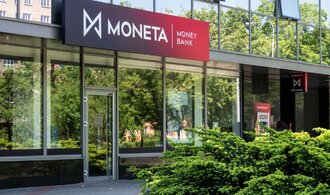 “Moneta’s shareholders, who perceive the transaction as too unfavorable, will sell their shares and will remain more those who look at the business more strategically and ventilate the good competitiveness of the new merged banking institution. In other words, although in the short term the transaction is rather advantageous for PPF, in the long run everyone will probably make a reasonable profit from it, “says Aleš Prandstetter, head of the securities trader eFrank.cz.

Even before the announcement of the transaction, some of the analysts emphasized that the agreed price of CZK 25.9 billion, which Moneta will pay for PPF’s assets, is high. “The price is exorbitant. Although the Air Bank Group operates as technologically advanced, its business model is not miraculous enough to justify an enormous premium over book value, ”adds Pfeiler.

Two years ago, a similar transaction was to take place for about 19 billion crowns. “Since then, the quality of Air Bank’s assets has deteriorated due to the pandemic. I therefore dare to say that the adequate amount offered for the Air Bank Group’s assets should be below this level, “adds Pfeiler.

IBM produced the first chip on the 2nm manufacturing process, with GAAFETs