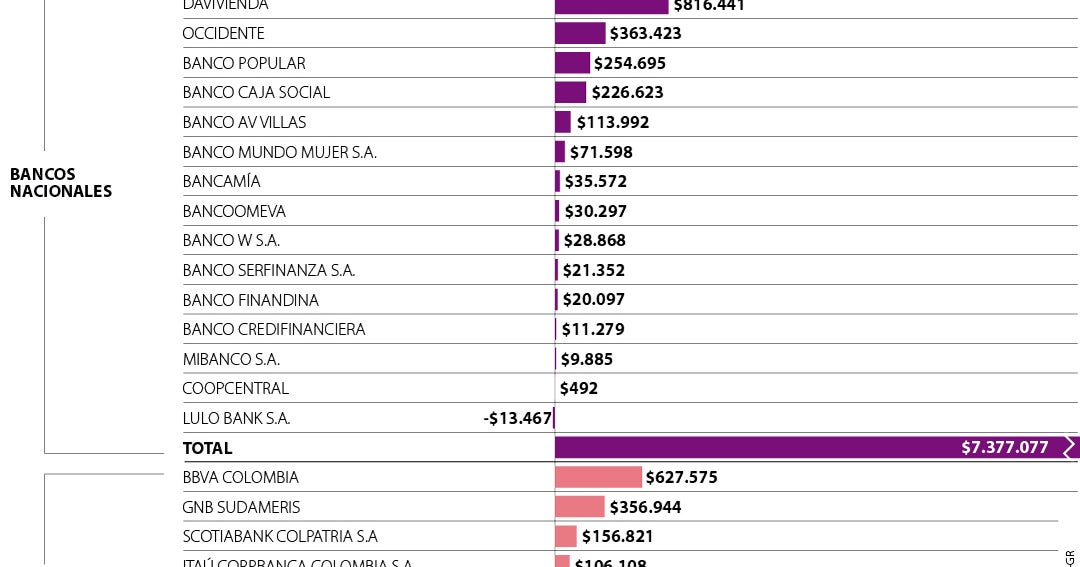 The Financial Superintendency of Colombia (SFC) revealed the financial system figures for September 2021. In the ninth month of the year, banks achieved profits of $ 9.31 trillion, which represents a growth of $ 1.13 trillion compared to August. National entities contributed $ 7.37 trillion (with an annual growth of 97.0%), international banks contributed $ 1.41 trillion (+ 1,404.3%) and first-tier public banks $ 524,302 million.

In the segment of credit establishments, banks were the ones that contributed the most profits, followed by financial corporations with profits of $ 1.6 billion; financing companies ($ 132,863 million) and financial cooperatives ($ 78,193 million).

The national banks that registered the most Profits in the system they were Banco de Bogotá, with profits of $ 3.63 trillion; Bancolombia, with $ 1.74 billion; and Davivienda, with $ 816,441 million. There are 17 national private banks and only one presented losses, Lulo Bank presented a deficit of $ 13,467 million.

The international banking entities that recorded the most profits were Bbva with $ 627,575 million; GNB Sudameris, with earnings of $ 356,944 million; ; and Scotiabank Colpatria with $ 156,821 million. Nine foreign banking entities operate in Colombia, of which only Banco Pichincha ($ 22,453 million) presented losses.

Compared to other sectors, the control entity reported that for the same month, the profits of the fiduciaries were $ 7.64 billion; the pension and severance sector closed with profits of $ 17.15 billion; for the medium premium segment the figure was $ 186,620 million; insurers recorded profits of $ 885,059 million and the securities intermediary sector for $ 501,800 million

The only sector that presented figures in the red in the period was that of Companies Specialized in Electronic Deposit and Payments (Sedpe) with a deficit of $ 17,403 million.

Total profits for the entire Colombian financial system in September was $ 40.44 trillion.