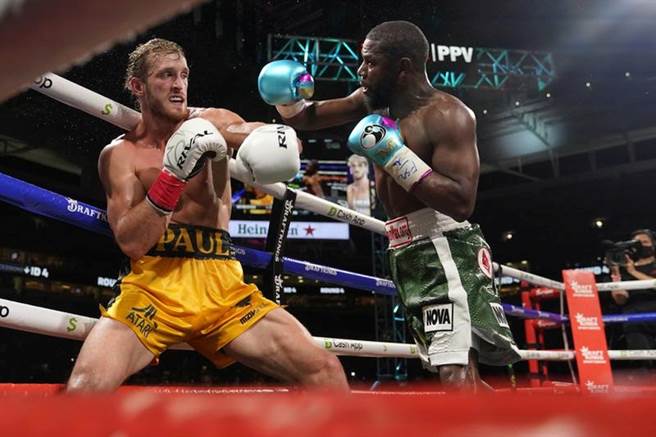 The high-profile boxing exhibition match, the 8 rounds of retired boxing champion Floyd Mayweather and net celebrity boxer Logan Paul finally debuted. Although the age difference is as much as 18 years (Rogan is 26 years old and Mayweather is 44 years old), Logan’s height and weight are also much larger. Mayweather, who spends his days in the gym, still maintains a steady stream of physical strength. The skills of the two above are very different, and they ended up peacefully (no victory) under the control of Mayweather.

At the beginning, the two men only looked at each other without punching, and then tried each other with jabs. Although Logan was larger, Mayweather stayed out of his arms and fisted back from time to time. Logan tried to jab for the attack in the second round, but failed to hit Mayweather, and the counter-attack was blocked.

Due to repeated misses, Logan was slightly fatigued in the third round and began to fight Mayweather close. Logan took the opportunity to sneak an uppercut and was warned by the referee. Mayweather played with Logan all the way, focusing on attacking the body to further reduce Logan’s physical strength. Next Logan came up with a heavy punch, which was easily resolved by Mayweather’s defensive posture. Logan seemed to have exhausted his energy at the end of the fourth round. Although he hit a few punches, he did not cause damage.

Mayweather began to strike in the 5th round. Logan’s jab lacked restraint, and he could not hit with heavy punches. In addition to close scuffles, he could only be beaten unilaterally. In the last few rounds, Mayweather completely controlled the situation, even if he stood within Logan’s attack range, Logan was helpless. In the 8th round, the match allowed a KO. Mayweather didn’t seem to be going to kill them all. Logan managed to survive, and the two ended up smiling.

Logan Paul may not be an elite boxer, but he has 19.89 million followers on IG, and even Mayweather (26.2 million followers) has to give him a bit of face. Mayweather said, “I think it’s fun. Everyone must understand that I’m not a 21-year-old boy, but it’s still fun to run with them on the court.” Logan gained enough capital to show off his fans. He raised his arms after the game. Shouting, he played 8 rounds with the legendary Mayweather and was not beaten.

Of course, the audience is very dissatisfied. The difference in technology and physical fitness makes this match quite ugly. Mayweather will never lose and he does not want to knock down his opponent. Logan is stalking all the way, lacking the excitement and shock of a boxing match. .

Xbox Series X and S will have support for AMD FidelityFX Super Resolution: Microsoft confirms it