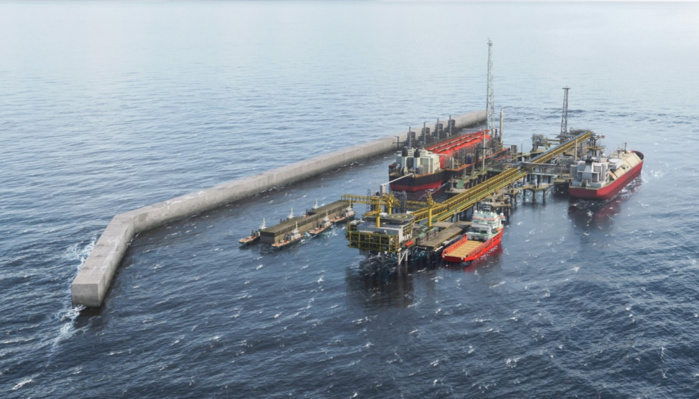 on the other hand, societal pressure on climate issues coupled with the health crisis seems to be an accelerator of the energy transition, challenging economic models and technological choices hitherto practiced in the production of fossil fuels.

The big oil companies have taken very important decisions on their strategies and future investments, which, according to the first analyzes, are oriented towards the decarbonization of energy production and drastic reductions in investment in energy production. fossils.

From this perspective, natural gas, by its nature and its carbon footprint, is considered a good compromise to support this energy transition towards less polluting energies and ultimately towards renewable energies.The recent discoveries of oil and gas in Senegal are likely to fundamentally transform the country’s economy, creating new opportunities for people and government, and attracting significant international investment in all key sectors of the country. national economy.

In this series of articles, we will first take stock of the global LNG market and its prospects. Then we will discuss the place that Africa occupies in LNG production and that it could occupy in the years to come. Finally, a last part will be devoted to Senegal with some recommendations concerning the management and development of this nascent industry.

Natural gas is considered a strategic resource in the global energy mix due to its abundance, versatility and low carbon dioxide emissions compared to other so-called conventional fossil fuels. According to the International Energy Agency (IEA), its share in the energy mix is ​​estimated at 20% [2].

b[Figure 1 – Evolution des différentes sources d’énergie dans le mix énergétique [1]]bAccording to the same IEA source, natural gas is the fastest growing fossil fuel source in an environment of new environmental regulations and even surpassing the share of coal in the global energy mix on the horizon 2030, becoming the second source of energy behind oil [1].

b[Figure 2 – Part des différentes sources d’énergie dans le mix énergétique [1]]bNatural gas, due to its versatility, is a very interesting source of energy. Indeed it can be used for the production of electricity, for industrial applications, domestic applications, the thermal needs of buildings and as fuel in the transport and mobility sector.However, its thermo-physical properties and low energy density make its use and logistics more complex than other forms of hydrocarbons, whether liquid or solid. To be transported, natural gas is either transported in gaseous form through pipes called a pipeline (about 60% of production), or liquefied to a cryogenic temperature (-160 ° C), to be stored and transported in the form of a pipeline. liquid by sea over very long distances.Despite the maturity of gas pipeline transport technologies, the substantial capital needs of these infrastructures and the geopolitical risks linked to the pipeline crossing of border and neighboring countries, can constitute a major obstacle for the development of certain gas projects.

These various risks have increasingly pushed industrial and financial players to favor maritime transport to transport natural gas from its point of production to the point of final consumption through liquefaction.In fact, the liquefaction process allows natural gas to pass from its gaseous state to a liquid state by cooling it extremely. Thus at the end of this process, the natural gas initially at an atmospheric temperature and in a gaseous state at low density, is found at a temperature of -160 ° C, corresponding to its boiling temperature at atmospheric pressure, sees its volume reduce. about 600 times compared to the gaseous state and above all is found in a liquid state. This liquid obtained at the end of the liquefaction process is called Liquefied Natural Gas or LNG.It is easier to transport long distances and in very large quantities thanks to specialized vessels which are called LNG carriers.

Figure 3 – LNG carrier illustrations; Type “Moss” on the left and Type “Membrane” on the right

This revolutionary process has played a very important role in the natural gas supply chain and the development of LNG.

Thus, LNG trade experienced spectacular growth in the early 2000s. At present, maritime transport represents nearly 40% of gas transactions in the world. According to the IEA, this share will reach 60% in 2040, i.e. more than the exchanges carried out by gas pipelines, thus leading to a profound transformation of the gas markets. [1]. Long compartmentalized to regional markets, gas is indeed seeing its horizon globalize in favor of transport by sea. As a result, gas becomes an increasingly easily tradable commodity on world markets like petroleum products. This globalization of natural gas translates de facto into a convergence of prices between the three major markets of North America, Europe and Asia. However, in order to continue on this trend, LNG will have to overcome significant obstacles in terms of supply and demand in a context of greenhouse gas reduction and decarbonization strategy in certain regions of the world such as Europe.

b[Figure 5 – Evolution de la part du GNL dans le commerce mondial de gaz naturel [3]]bThis first part made it possible to highlight the importance that natural gas and especially LNG will have in energy transition policies because of its low carbon emissions compared to other fossil fuels such as oil and coal. It also enabled us to see that in the near future, LNG will dominate the natural gas trading market for strategic reasons but also for costs.Despite these optimistic forecasts for the LNG market, and which seem to be good news for African producing countries and future LNG producers, there are very important challenges such as global supply and demand in the face of climate and political issues. decarbonization of certain regions of the globe.

The next two contributions from GPOSG will address these challenges mentioned above.——-The Group of Senegalese Professionals of the Diaspora on Oil and Gas (GPSOG) brings together Senegalese professionals from the hydrocarbon sector who work in the diaspora (America, Europe, Asia, Africa) and who work in the private sector, think tanks and in international organizations. The ambition of the GPSOG is to make use of this Senegalese expertise inDiaspora at the service of the country for an optimal management of natural resources for the benefit of present and future generations.

they are as huge as they are cheap