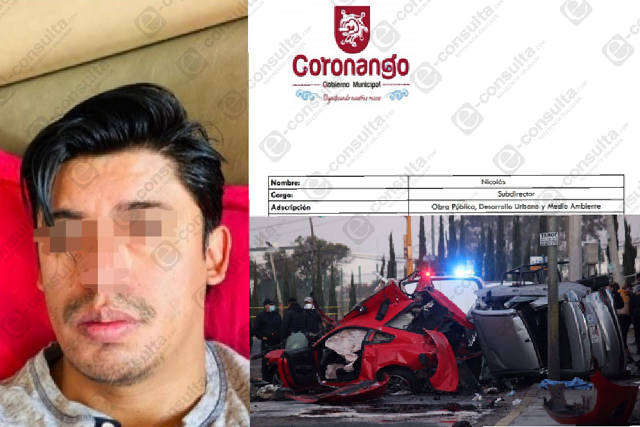 Nicolas AR, who yesterday morning crashed his car Ford Mustang and caused the death of three women as well as injuries to two more people in the Villa Verde neighborhood of the city of Puebla, is civil servant attached to the area of public works, urban development and environment Of the municipality of Coronango.

This is stated within the register of officials of the municipality of Coronango 2018-2021, headed by Antonio Teutli, where it is reported that Nicolás AR is in charge of vice principal of said area with a net salary of 15 thousand pesos a monthAlthough the 2016 Mustang in which he crashed yesterday is valued at almost 400 thousand pesos.

Just a few hours after the accident, this man’s social networks were closed, however in one of them as Facebook you could see that Nicolás identified himself Government worker, in addition to having previously worked for the municipalities of Puebla Y San Pedro Cholula.

He said he was influential and tried to escape

Nicolás, who is he architect by profession, he was insured by the State Police and Municipal Traffic in the early morning of Saturday, November 7 after crashing a car Ford Mustang 2016 red with XXA2022 plates from Tlaxcala, in the Diagonal Defenders of the Republic at the height of the Villa Verde neighborhood.

The now detained was traveling to evident speeding and under the influence of alcohol when he lost control of the Mustang in a curve, he jumped the median and a car hit him Hyundai i10 gray that circulated in the opposite lane of the road, to finally be all pressed against a at the bar.

By the time elements of the State Police arrived Nicolás was trying to flee saying it was influential and that they could not stop him, however in the end he was at the disposal of the Puebla Municipal Transit.

Nicolás was traveling with four women, two of them identified as Fernanda from 23 years old, as well as two other girls of approximately 27 years whose identities were not disclosed but who like the first they died in the place of the events.

The fourth woman was identified as 24-year-old Wendolin old, which was seriously wound when she was pressed into the sports car but after being released she was transferred to a hospital, same case of 32-year-old Victor old, who was driving the Hyundai i10 car.

Relatives of the victims who contacted this medium indicated that they are afraid that Nicolás may make valid their threats and either released because of the assumption influentialism presumed, so they called on the authorities so that the case don’t go unpunished.

City Council would cancel it by clause

Regarding this situation, Coronango City Council through their social networks and those of the president Antonio TeutliThey indicated that the corresponding authorities will be in charge of defining Nicolás’ legal situation.

“The government of Coronango regrets the mishap motor vehicle occurred in Puebla, so it will be the corresponding authorities who determine the legal situation of the person involved“, they exposed in social networks.

Sources in the Coronango government stated that the official was after hours, he was not driving an official vehicle and was even in another municipality, so they will wait for the investigations to conclude to find out if he will have a repercussion administrative.

However according to contract of all the public officials of Coronango, in the event that at any time he is involved in an incident where a criminal process against you, will cause immediate discharge as a Coronango City Council worker.

US Vice President: I will not be the last woman in this position in the world