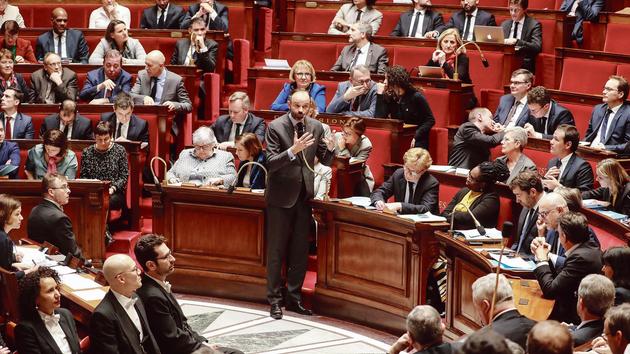 They wanted it, they got it. Within the executive, there was little excitement on Sunday for the outraged reactions of the opposition to the use of article 49-3 by the Prime Minister to push through the pension reform. On the right as on the left, no one had spared no words in denouncing the surprise announcement by Edouard Philippe on Saturday night in the hemicycle. “Government coup“For the Communist Fabien Roussel,”totalitarian impulses“By Emmanuel Macron for the leader of the Insubmissive Jean-Luc Mélenchon,”worst solutions“, For environmentalist Yannick Jadot,”utter cynicismFor the patron of deputies LR Damien Abad…

So many comments that leave Matignon marble. “It looks like an Italian soccer player who simulates a foul in the area to get a penalty“Said a close relative of Edouard Philippe. We are not going to fall into the big trap like a house that La France rebellious holds out to us. The National Assembly is not a ZAD“. But outside, it looks like it.

Just a few dozen minutes after the Prime Minister’s announcement, a spontaneous gathering of protesters was organized via social media outside the building to protest against the use of section 49-3. Later in the night, the campaign permanence of Edouard Philippe, head of the list for the municipal elections in Le Havre, was tagged and stoned. In the aftermath, the Prime Minister received a friendly message of support from Manuel Valls, the last Prime Minister to have used 49-3 to pass the Macron laws in 2015 and El Khomri in 2016.

Within the executive, the decision to resort to article 49-3 was taken since last week. On Tuesday, Edouard Philippe told the National Assembly that he was not prohibited from using it. But it was Saturday morning during a Council of Ministers convened on the coronavirus that it was formally recorded.

Emmanuel Macron was then very firm with regard to his ministers so that nothing leaked before Edouard Philippe went up to the gallery of the National Assembly. The head of state wants to preserve the element of surprise. “This is the principle of 49-3“Slips an adviser. Finally, the use of this criticized article was announced at 5.30 p.m. by the Prime Minister in the Chamber. Neither Jean-Luc Mélenchon nor Marine Le Pen were present. “This saved us from a scandal“We breathe within the executive.

But the effect of surprise does not prevent the opposition from tabling two motions of censorship as of Saturday evening, the first by LR, the second by the PS, the PCF and La France insoumise. On the right as on the left, we still have reflexes. They should be discussed next Tuesday but have no chance of succeeding since LREM alone has a very large majority in the National Assembly and can count on the support of the Modem.

We have to put the church back in the middle of the village. Constitution Authorizes Obstruction, Also Authorizes Government To End Obstruction

An advisor to Edouard Philippe

In the wake of the announcement of the use of 49-3, and once past the stupor, the majority is ordered to unite behind the executive. It is an understatement to say that the announcement of the use of 49-3, “learned from the press“, Annoyed more than one among the LREM deputies. “We can all deplore the fact that a crucial debate for the future of the French was prevented by the systematic obstruction of the LFI and GDR groups, wrote the boss of the deputies LREM Gilles Le Gendre to his troops as of Saturday evening. In this circumstance, the use of 49-3 is not intended to coerce the majority, it simply allows our institutions to function normally“.

Even if Emmanuel Macron had little taste in his time the use of 49-3 by Prime Minister Manuel Valls to pass his law on growth and activity. “We have to put the church back in the middle of the village. Constitution Authorizes Obstruction, Also Authorizes Government To End Obstruction“Sweeps an advisor to Edouard Philippe.

The line of the executive is clear: by using article 49-3, the Prime Minister wanted to put an end to “to this episode of non-debate“. Since the start of the examination of the pension reform in the National Assembly, La France insoumise and the Communists have multiplied the amendments, sometimes absurd. “I do not have the feeling that what we are witnessing is what the French – whether favorable to the bill or not – expect from their representatives nor that our democracy can afford the luxury of such a spectacle“, Annoyed Edouard Philippe Saturday evening at 8 pm TF1.

The opposition’s filibuster strategy had made it impossible to reach Emmanuel Macron’s goal of having the text adopted at first reading before the municipal elections in March and finally in the summer. The timetable is tight since the President of the Republic wants the reform to come into effect in 2021, which presupposes that certain measures are put in place in the budget which will be examined in the fall.

The sequence of pension reform is not over yet. On the street side, the unions are already considering new mobilizations in the face of recourse to 49-3 deemed “deeply outrageous“By the CGT and”unacceptableBy FO. On the Senate side where the right is the majority, the executive is preparing for another parliamentary battle. “They will not make such a gross obstruction but they will be intractable on the bottom“Worries an adviser. Édouard Philippe recognized it, this 49-3, “it’s not an end, it’s a step“.