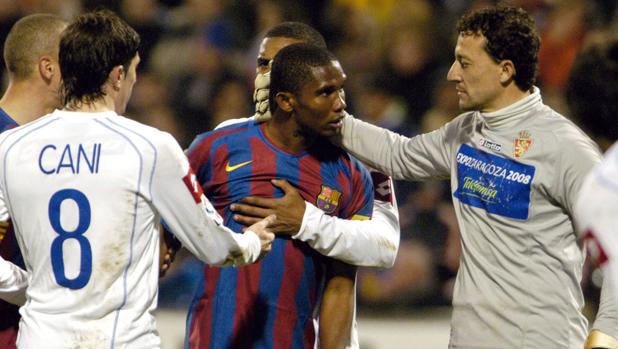 The interruption and subsequent suspension of the League match between Rayo Vallecano and Albacete due to the insults that the Ukrainian player of the Manchego team Roman Zozulya has suffered, to whom part of the public has shouted «Nazi fucking», is the first case of this type in the history of the Spanish League.

-9 February 1992: Valencia coach Guus Hiddink forces to remove a banner with Nazi symbols in the Valencian stadium Luis Casanova before starting the match against Albacete.

-2 April 2000: Darío Silva, Uruguayan striker of Málaga CF, attacked a Real Oviedo fan in Carlos Tartiere who had insulted him and called "black."

-17 November 2004: English players Jermain Defoe and Andy Cole are subjected to racist insults during the friendly match against Spain, at the Bernabéu. A day before the incident had been repeated in the meeting of the sub 21 in Alcalá de Henares. FIFA sanctions the Spanish Federation with 60,000 euros.

-27 November 2004: Samuel Eto'o receives a yellow card after throwing the ball to the public of Getafe after being unbelieved throughout the game with imitation sounds of monkeys.

-11 December 2004: Eto'o is the target of racist insults in the match against Albacete. Two of the identified spectators were fined 6,000 euros and forbidden access to sports venues for 6 months.

-12 February 2005: Samuel Eto'o celebrates his goal in Zaragoza parodying an ape in response to the racist gestures he received from the stands and denounces the racist and xenophobic attitudes suffered by him and other athletes.

-12 March 2005: The Costa Rican striker of Malaga Paulo César Wanchope hits a fan of his club in La Rosaleda after two fans insulted him and others made monkey sounds.

-20 March 2005: Ronaldo Nazario de Lima launches a bottle of water towards the stands of La Rosaleda in Malaga after receiving racist insults from Real Madrid fans.

-3 April 2005: UD Melilla, from the National Youth League, retires from the field when he played against CD Oriente, in Almería, due to the continuous racist insults to his players and coaches.

-16 April 2005: they throw a banana in the area defended by Espanyol goalkeeper Carlos Kameni at the Vicente Calderón stadium.

-15 January 2006: Javier Clemente says in the press conference after Barcelona-Athletic Bilbao: «He believed that those who spit are those who come down from the tree», alluding to the spit that Eto'o threw Unai Expósito at him. The case was filed by the Competition Committee.

-25 February 2006: Samuel Eto'o threatens to leave the field of La Romareda, because of the racist screams he received from the stands. The player gave up after he was convinced by the referee and Zaragoza players. The Aragonese club was fined 9,000 euros.

-27 April 2014: Dani Alves, a spectator from the Villarreal field, throws a banana and the Brazilian eats it. The action had a worldwide impact. The club was fined 12,000 euros and chose to close during a meeting the conflicting stand in which he placed a banner with the slogan "No to racism."

-23 April 2014: Racist incidents at the Bernabéu in the semifinal match of the Champions League against Bayern Munich. UEFA sanctions Real Madrid with the partial closure of its stadium during a match and to display a banner with "No to racism."

-21 August 2016: Fans of El Molinón utters racist insults, with imitations of monkey sounds, against Athletic Club player Iñaki Williams and the referee interrupts the match for a minute. Sporting was fined 18,000 euros. .

Serin on France-England: "My wish is to have number 9 in the back" – Fil Info – 6 Nations