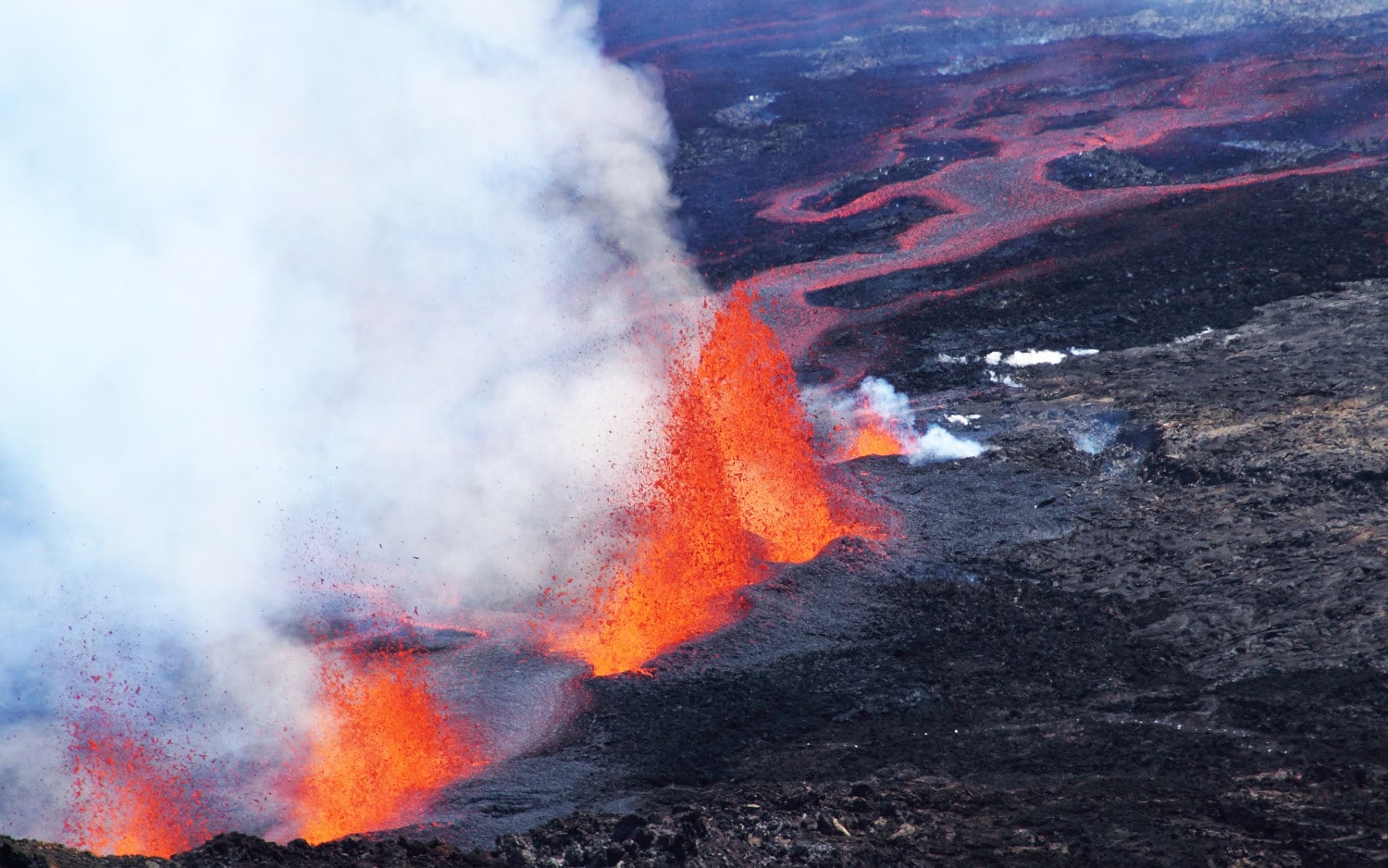 Researchers have identified branching plumes deep within the mantle, which appear to support global volcanic activity. They explain in particular the existence of volcanoes which are not located at the borders of tectonic plates. These plumes probably contributed to the formation of continents and could, within millions of years, reshape the surface of the Earth.

A plume designates a rise of abnormally hot rocks, coming from the Earth’s mantle. Reunion Island is located just above one of these plumes and its Piton de la Fournaise is currently one of the most active volcanoes on the planet. But the researchers note that modern magma eruptions are nothing compared to those of the past: about 65 million years ago, for 700,000 years, a series of lava flows covered nearly 1.5 million km2. of land in western India over 2400 meters thick, giving rise to the Deccan traps.

In 2012, a team of geophysicists and seismologists set out to map the plume at the origin of this phenomenon, by deploying a giant network of seismometers on the bottom of the Indian Ocean. Almost a decade later, they report that this plume is actually turning out to be stranger and more complex than they thought: in an article in Nature Geosciences in June, they explain that a titanic magmatic plume rises from the mantle, with multiple ramifications oriented towards the crust, from which other vertical plumes emerge that underlie the current volcanic hot spots.

An explanation for intraplate volcanoes

This discovery came just months after the publication of another study describing the evolution of mantle plumes in East Africa: the authors identified at least two different plume heads under the Afar region (Ethiopia) and the Kenya from the same source, at the core-mantle boundary; a third plume located between Kenya and Afar could have caused the traps of Ethiopia 30 million years ago and would now merge with the Afar plume.

Comparison of the two studies suggests that magmatic plumes may be more idiosyncratic and have more elaborate backgrounds than traditional models assume. The plume beneath Reunion Island may be almost as old as Earth itself, the researchers say. ” By examining the core-mantle boundary, you may be able to predict where the oceans will open up. Said Karin Sigloch, co-author of the study. This allows the team to predict which lands will one day be wiped off the map; if the new models are correct, in a few tens of millions of years South Africa, and perhaps even the earth as a whole, will be uninhabitable.

It is now accepted that the theory of plate tectonics, advanced in the 1960s, is at the origin of many geological phenomena. As they move, they cause earthquakes, intense volcanic activity, or the formation of mountain ranges or ocean trenches at their borders. The Pacific Ring of Fire – which accounts for nearly 75% of the planet’s emerged volcanoes and which is one of the most important areas of seismic activity – does indeed coincide with a phenomenon of subduction between oceanic plates. However, this theory does not explain the existence of the volcanic archipelago of Hawaii.

Far from any tectonic plate border, this archipelago appears like a geological aberration. In 1963, Canadian geophysicist John Tuzo Wilson suggested that volcanic chains like Hawaii’s form when a tectonic plate permanently drifts over a stationary hotspot in the mantle; which causes a series of eruptions that die out as the plate moves away from the magma source. Then, in 1971, American geophysicist William Jason Morgan proposed that these hot spots were caused by plumes of particularly hot material rising from the lower mantle.

Over the following decades, geophysicists confirmed that the plumes are likely the source of today’s intraplate volcanoes – those of Hawaii, but also terrestrial volcanoes, such as the Yellowstone supervolcano. The plumes are excessively hot (nearly 200 ° C hotter than the surrounding mantle); thus, when they reach the base of the tectonic plates, they melt some of this rock and this magma is added to the material which they carry from the depths of the Earth, forming a hot spot.

Other proof of the existence of plumes: the presence of helium 3 in the lava ejected from intraplate volcanoes; however, this helium isotope was trapped deep in the Earth during its formation.

While no plumes have been observed to date, scientists have gathered a lot of evidence to support their existence. To these are added data from seismometers: as seismic waves move, the geological bodies they pass through change their speed and trajectory; in particular, through hot rock, they slow down. However, specialists have observed a slowing down of seismic waves through elongated structures coming from the deep mantle and connected to hot spots on the surface.

Experts believe that plumes, such as the branched plume detected in the Indian Ocean have played and will continue to play a central role in the history of our planet. Some suspect that African plumes spent at least 120 million years shattering the ancient supercontinent of Gondwana. Thus, if their activity continues, they could cause in several million years the complete disintegration of the African continent, destroying South Africa and making East Africa a new floating microcontinent.

People pay even more. Energy suppliers have announced a dramatic rise in prices