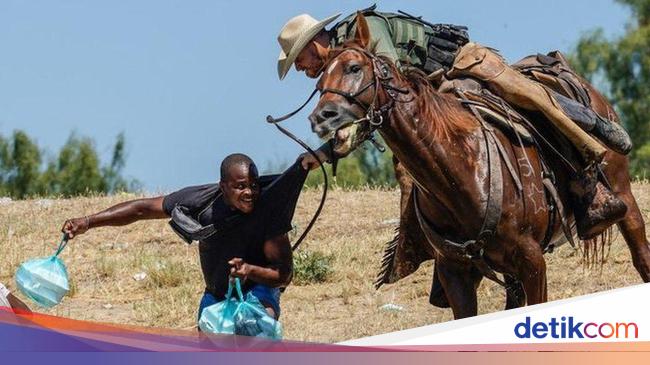 Video footage and photographs depicting US border patrol officers on horseback chasing migrants (and brandishing long bridles like whips) near the Rio Grande river in Texas, have sparked controversy across the country.

Some social media users said the photos were reminiscent of the violence that took place during slavery in the US.

These scenes take place in the midst of the latest migrant crisis, hitting the US-Mexico border, after last week, as many as 12,000 migrants – mostly from Haiti – were detained in makeshift camps under a bridge linking the Texas city of Del Rio with Ciudad Acuna in Mexico. .

“To prevent injury from heat-related illness, the shaded area under the Del Rio International Bridge serves as a temporary stop while migrants wait their turn to be taken into USBP (US Border Patrol) custody,” US authorities said in a statement last week. following criticism of the plight of migrants.

The US government began deporting hundreds of migrants on Sunday (19/09) and closed the Del Rio border gate, pushing hundreds of other Haitians back to the Mexican side of the border.

Since they were held under a bridge, some migrants have been forced to cross into Mexico to buy food and water for themselves and their families (which are in limited supply on the American side of the border) before returning to makeshift camps.

Photographer Paul Ratje, from the news agency AFP, photographed the scene near a crossing point on the river, where migrants commute across the border to get food for their families, and find themselves blocked by officers on horseback

“I came to that point, and everyone crossed over there,” the photographer told the newspaper The Washington Post. 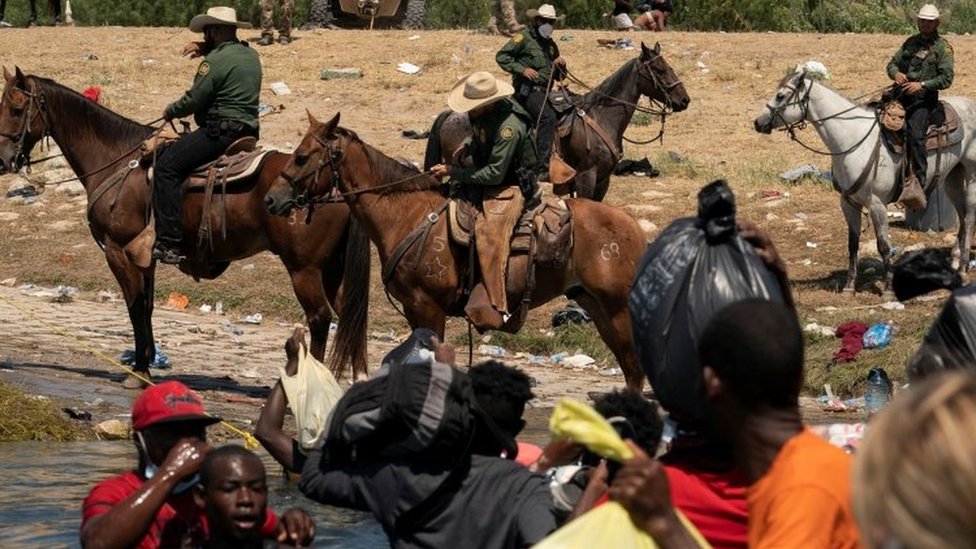 The photos show patrolmen carrying what some have described as “whips”, although authorities say they are long reins that guards use to “ensure control of the horse”.

“There’s a current [migran] continuously and [petugas patroli] said: ‘No, you cannot enter. Back to Mexico.’ But people say, ‘But my family is there,'” Ratje told Washington Post.

This all happened when one of the officers on horseback momentarily caught a man who appeared to be carrying a bag of food.

But in the end, despite the patrol’s intervention, the migrants managed to cross the river and reach the camp, according to US media.

“Some of the migrants started running trying to avoid the horsemen, and one of the officers grabbed a Haitian by the shirt and he ended up swinging the person while the horse ran in a circle,” he said of the photos. 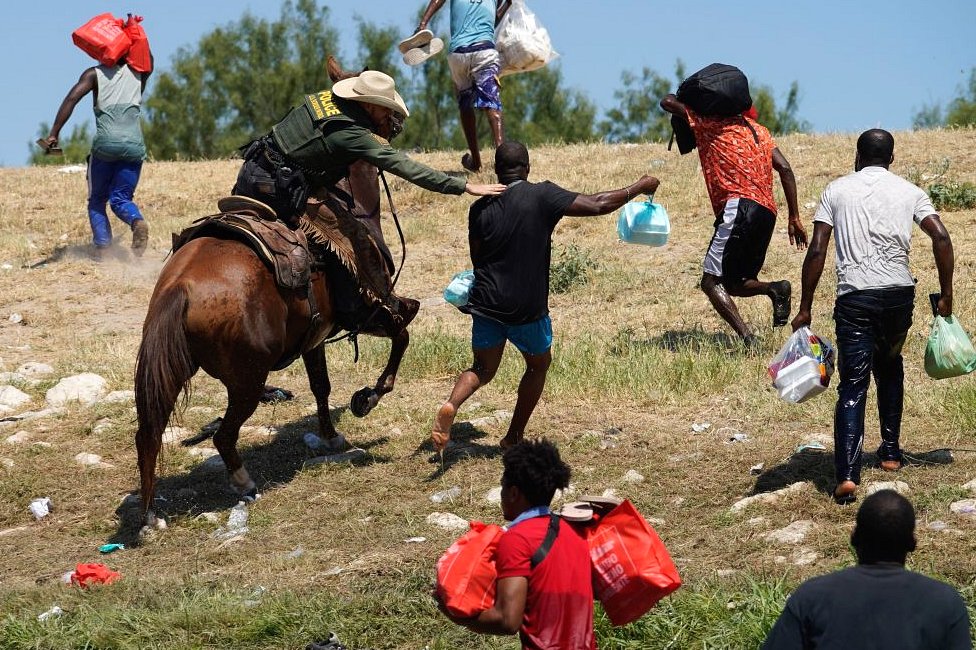 Border guards patrolling on horseback were not uncommon, due to geographical conditions, and other reasons.

“In this case, the push was not very successful, partly because the migrants were trying to return with food,” he said.

On Monday (20/09), White House spokeswoman Jen Psaki said: “I don’t think anyone who saw the footage would think it was acceptable or appropriate.”

“I don’t get the full context [dari adegan itu]. I can’t imagine what context would make it appropriate,” he added.

“Of course, they [penjaga perbatasan] should never be able to do it again… It’s definitely horrible – the scene.” 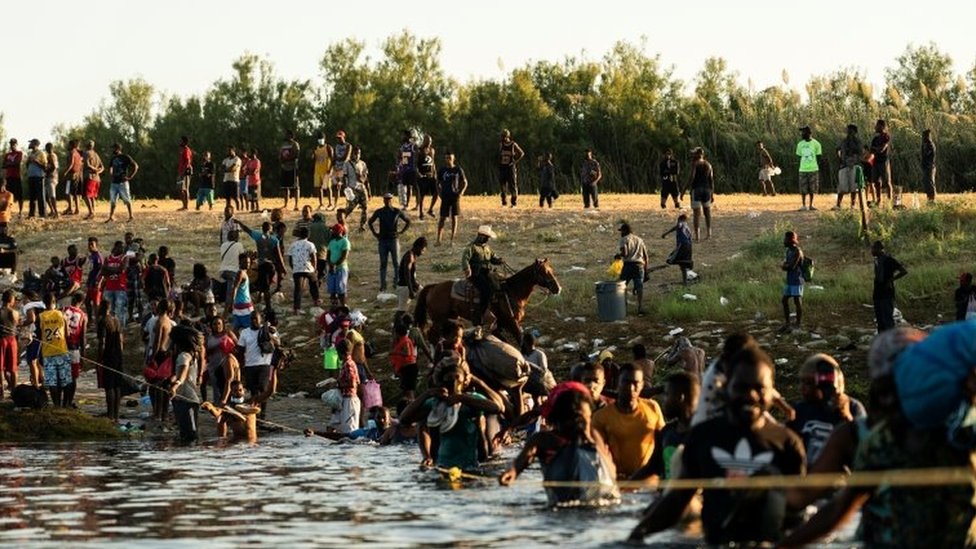 Democratic congressman Ilhan Omar described the actions by border officers as “a violation of human rights” and “cruel, inhumane, and in violation of national and international law”.

The United States Secretary of Homeland Security, Alejandro Mayorkas, said the incident would be investigated, describing the situation of the migrants as “challenging and heartbreaking”.

However, he issued a warning: “If you come to the United States illegally, you will be returned. Your journey will not be successful and you will endanger your life and that of your family.” 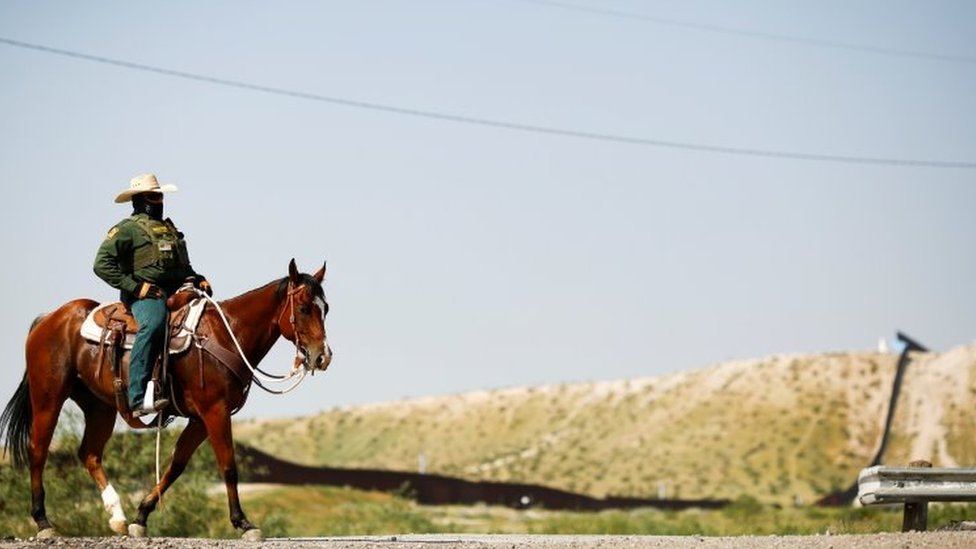 On Monday afternoon, the US Department of Homeland Security (DHS) issued a statement saying it has “no tolerance for harassment of migrants”.

“The footage is deeply concerning and the facts of a full investigation, which will be carried out swiftly, will determine the appropriate disciplinary action to be taken,” DHS said.

The head of the US Border Patrol, Raul Ortiz, said the incident was being investigated to ensure there was no “unacceptable” response by law enforcement, the news agency reported. Reuters. 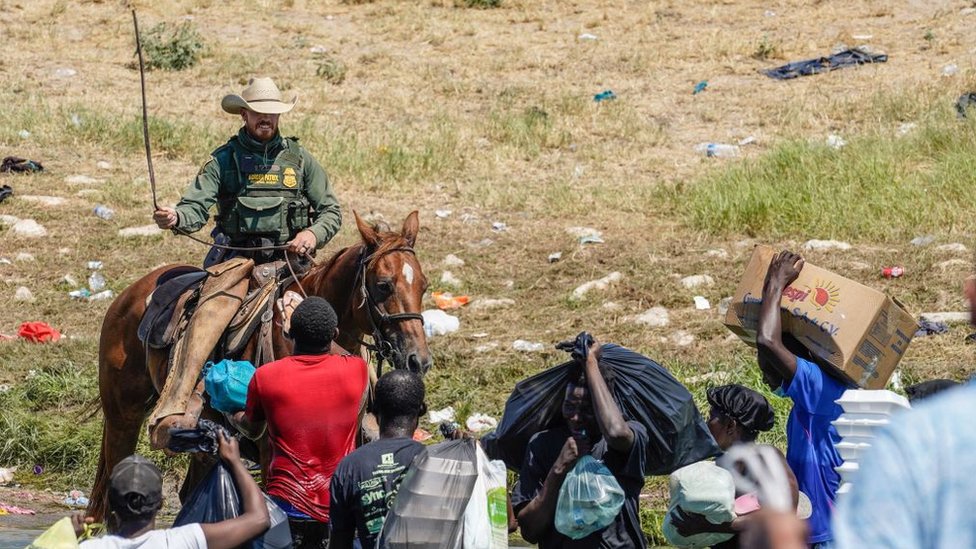 He added that patrol officers, who work in difficult environmental conditions, try to ensure the safety of migrants while searching for potential smugglers.

The situation presents new political and humanitarian challenges for the administration of President Joe Biden, which has vowed to be more “humane” to migrants and those seeking asylum than his Republican predecessor, Donald Trump.

Haiti has recently been hit by two crises – the assassination of President Jovenel Moise and an earthquake that devastated the southwestern part of the country – but most Haitians on the US border fled their country years ago, after the 2010 earthquake that killed 200,000 people. , reports BBC Monitoring. 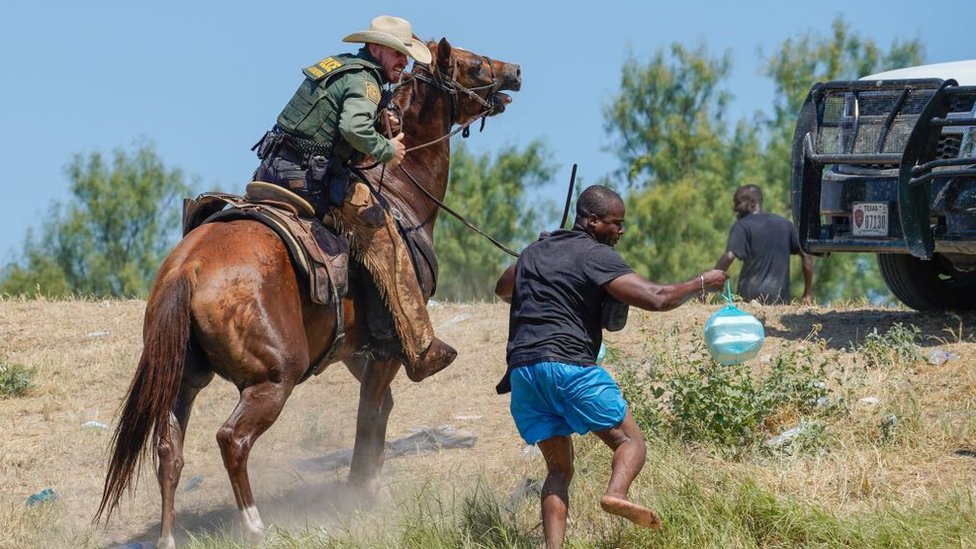 They have lived and worked in South America for some time, in countries like Brazil or Chile.

In the past two days, 560 migrants have arrived in Haiti, and thousands more are still in Texas camps, news agency reports.EFE.

This Monday, 233 deportees arrived in Haiti, 45 of them children and 45 women.

Nearly all of the deported women had a child or baby in their arms, according to the same source. 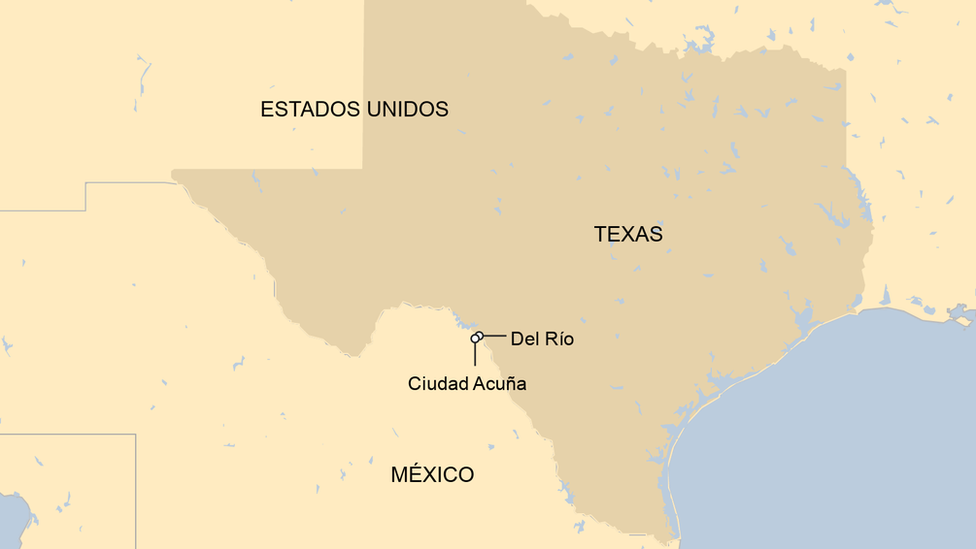 In addition to those already deported, more than 6,000 Haitians have been transferred to other immigration processing centers, according to US authorities, also for deportation.

Upon arrival in Haiti, several Haitians claimed they had been abused by US border officials. 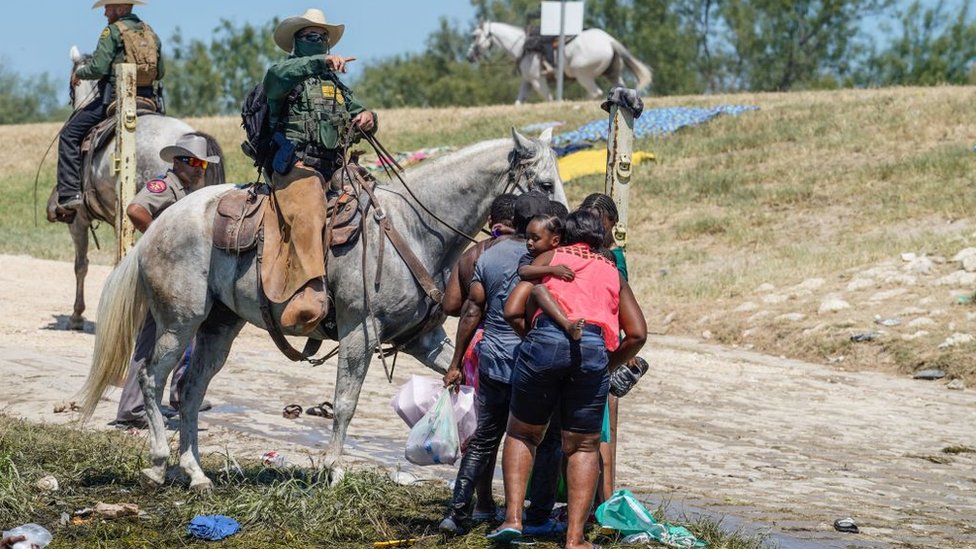 “They treat Haitians like thieves. Haitians are not thieves, but people looking for a better life. They don’t treat people from other countries like that. It’s racism,” said a 30 -year -old woman who identified herself from Cap Haitien. to the news agency EFE.

Miroff from the newspaper The Washington Post said the area under the bridge looked like “a small town, with its own economic life, often focused on food.”

Meanwhile, the United Nations refugee agency, UNHCR, said it was monitoring the expulsion of Haitian migrants from the US border, adding it was critical that people who fear persecution have access to asylum, the news agency reported. Reuters.

The US government has reported a spike in migrants arriving at the US border with Mexico this year.

The number of people detained there in July stood at more than 200,000, the most in 21 years, according to government data.

people for the first time in 21 years, according to government data.

Also watch the video ‘Thousands of Haitian Migrants Heading to the US Via Mexico’:

This they discussed first – VG