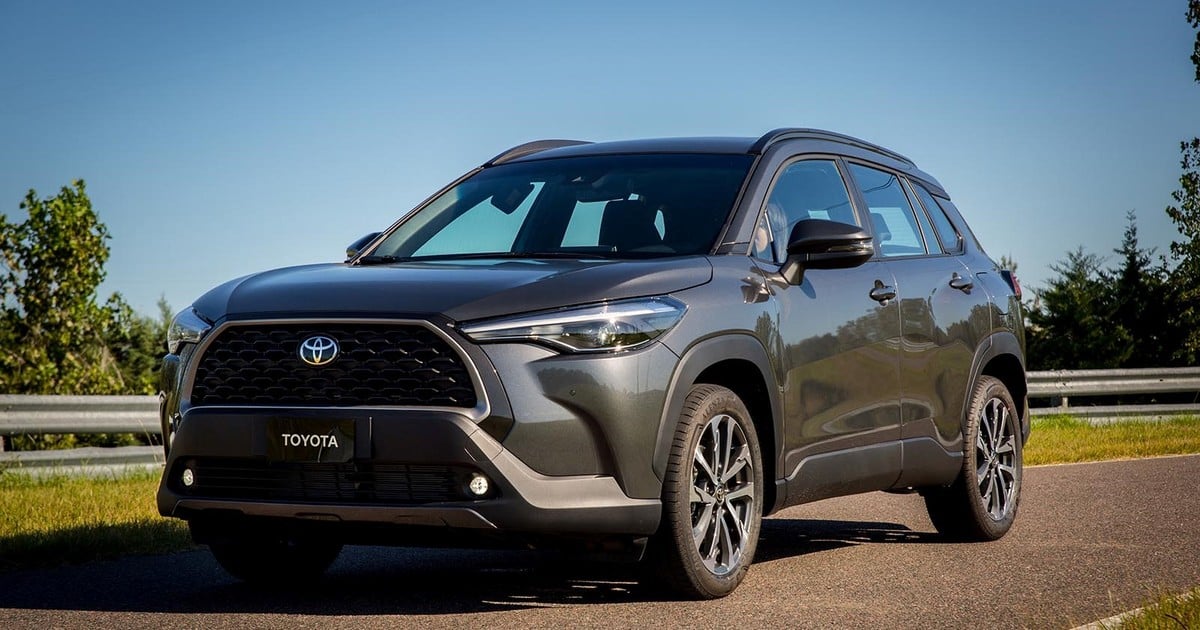 The market demands SUV and brands offer SUVs. The last to add one more version of this type is Toyota, which introduces the Corolla Cross, neither more nor less than the SUV version of the world’s best-selling car.

In our market, the Corolla sedan is a benchmark in its segment, due to the qualities of the model and the reputation who knew how to build the Japanese brand in terms of reliability and responsiveness of its after-sales service.

With that cover letter comes this alternative with the fashionable silhouette that the vast majority of users long to have.

The Toyota Corolla Cross drifts and carries many pieces from the midsize sedan, but has a style of its own.

The Corolla Cross arrives imported from Brazil, where it is built on the GA-C (Global Architecture – Compact) platform, the same one used for the Corolla sedan and other company models such as the Prius and the CH-R.

This condition leads to mechanical similarities between these models, but it does not mean that they are the same. There are many commonalities between the SUV and the sedan, but there are also big differences.

The design is quite different from the sedan model. It is not a Corolla with anabolics, it has its own style and with all the elements that make an SUV attractive: bulky fenders, plastic protections at the front, back and sides, and a large grill.

The Corolla Cross range consists of 5 versions (plus a limited launch edition), of which 3 will be gasoline and 2 will have the hybrid system Toyota propulsion, which combines a gasoline engine with an electric one.

The version tested by Clarion this time it was gasoline, at its highest level of equipment (SEG). And although the official prices will only be known on April 1, the dealers that are already closing operations are offering the range with values between 2.5 to 3.8 million pesos.

Although these prices will surely go up after this pre-sale period and pending official confirmation, they are very competitive against the competition.

For example, the starting price of the Jeep Compass, one of its main competitors, starts at 3.9 million pesos. And that is the official price, which today is difficult to reproduce as is at the dealership.

The powertrain is the same as in the sedan: an engine of 2.0 liters of 170 horses, a CVT automatic box and front wheel drive. Yes, no version of the Corolla Cross will have four-wheel drive. That choice among Toyota’s mid-size SUVs will be unique to the RAV4.

This mechanism allows to obtain a harmonic driving, prioritizing ride comfort above all. Responses are optimal, except when a lot of power is required; there the operation of the box makes the first reaction not as immediate as expected.

However, at low speed that changes, since in the last update of this transmission it was added an additional gear which provides a faster reaction.

The box offers a manual gear shift option and for that it generates 10 speeds in its system. Too many for the use that a normal user can give him in his day to day.

The Toyota Corolla Cross features a simple design on the inside, with the controls at the driver’s fingertips.

With driving appear the biggest differences with respect to the Corolla sedan. First because the driving position is higher (120mm difference) and that provides a wider field of view than you have in the sedan.

But in addition, the center of gravity is modified (higher in this model) and the suspension scheme, the set-up of the same and the height to the ground also change substantially.

For starters, the schematic of the rear axle it is not independent as in the sedanInstead, it carries a torsion bar. The result in handling is a slightly steeper body lean when cornering tight corners, but without compromising directional stability.

Compared to the sedan, the Toyota Corolla Cross does not have independent rear suspension.

Without ceasing to be an agile vehicle that can be easily driven in everyday traffic, when there are sudden changes of direction the Corolla Cross does not feel as effective as the sedan, something to be expected due to the difference in height and the rear suspension.

The steering may be too soft and a little slow. But nothing prevents it from delivering great ride comfort, with good cabin soundproofing and an engine that barely whispers to 2,100 rpm traveling at 130 km / h.

Inside it exhibits a style very similar to that of the Corolla sedan, where clean surfaces are prioritized. The materials are good and the quality of the finish is the one usually presented by the Japanese brand in a model of this category.

The dashboard of the Toyota Corolla Cross features a digital display in the center and analogue gauges.

In this version, the dashboard has a digital display in the center of it and the analog pointer indicators appear at the ends. The information received is a lot.

It is complemented by another screen in the center console that is located high above and allows little deviation of the view of the road. It also helps the support of buttons and physical knobs that avoid wasting time with several steps while manipulating the screen. Image quality may be better.

The trunk of the Toyota Corolla Cross is slightly smaller than that of the sedan.

The difference in interior space is only felt at head level compared to the Corolla sedan. Even the trunk and fuel tank are smaller in the SUV.

The equipment in general is high. The security items are worth highlighting. All versions include 7 airbags (front, front side, curtain and knee for the driver) and stability control.

Already in this SEG version the provision increases mainly with the driver assistance systems. Adaptive cruise control, autonomous emergency braking and lane keeping system are the ones that stand out.

The Toyota Corolla Cross has all the details that make an SUV eye-catching.

With a high level of equipment in all versions, the Corolla Cross brings with it almost everything that made the sedan a benchmark but with the design that everyone wants to show off.