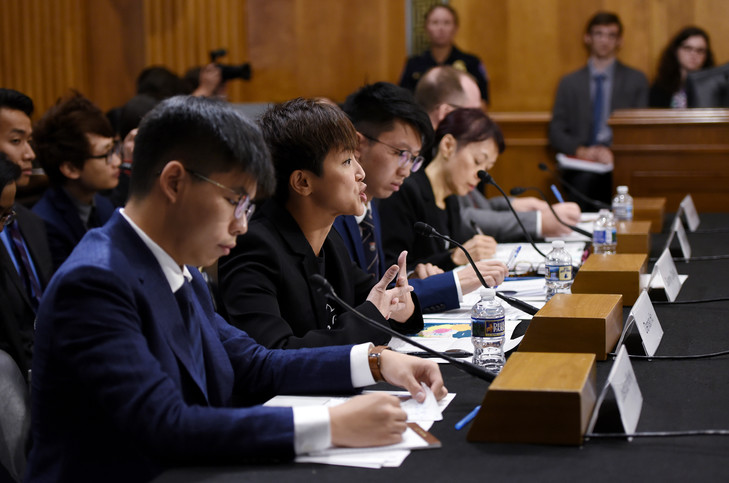 Mission accomplished. A delegation of several protesters in Hong Kong such as the young Joshua Wong or the famous singer Denise Ho defended their case in Washington with congressional Democrats and Republicans.

They urged them to put pressure on China, stressing that any decline in the special status accorded to this Special Administrative Region (SAR) would encourage China to impose its "Communist values" not only in Hong Kong but elsewhere in the world.

The situation is becoming more and more worrying in Hong Kong

During a hearing that will not fail to irritate Beijing, several pro-democracy activists have been received by Republican and Democrat members of a congressional committee to expose the growing concern in Hong Kong.

"If Hong Kong falls, it could easily become a stepping stone for the Chinese totalitarian regime to push its rules and priorities abroad, using its economic power to convert others to its communist values."said Denise Ho, a pop music star whose music was censored in China because of her involvement in the movement. "This is not a call for" foreign interference "or for the independence of Hong Kong (As Beijing says, Ed), said the 42-year-old artist, it is a call for human rights and democracy. "

Highlighting their rare rights-based union in Hong Kong, US committee members are considering a draft law on "Human Rights and Democracy in Hong Kong". For decades, the territory is linked to Washington by a special economic status that allows it to be exempt from restrictions (including customs) applying to mainland China.

"We should express our concerns to China"

The text in preparation would condition the maintenance of this special status to the annual approval by the State Department of a situation deemed suitable for the respect of human rights by the Hong Kong authorities. A reality that is being degraded with regard to police abuses. It also provides for penalties for any manager who "Fundamental freedoms"which are also being reduced politically or by the press.

Even if the Hong Kong delegation is perfectly aware that this law could take months to be adopted by the US Congress, they know that this threat will weigh in the coming decisions by the Hong Kong and Beijing governments, especially in a few days celebrations of the 70e anniversary of the creation of the People's Republic, October 1, 1949. "Beijing should not win on all fronts, reaping the economic benefits of Hong Kong's prestige in the world while eradicating our socio-political identity." added young activist Joshua Wong, 22, one of the faces of the protest.

"As I speak, Hong Kong stands at a crossroads and the stakes have never been greater. Send the tanks to Hong Kong remains irrational but not impossible, he hammered when we just learned that the horse racing in Happy Valley Wednesday, September 18 have just been canceled " For safety reasons ", just like the fireworks of October 1st.

Engaged in full trade negotiations with Beijing, the administration of President Trump has so far low profile but Hong Kong could very well become an important lever in these negotiations. Beijing and the Chinese authorities have already accused Washington of getting involved in Hong Kong affairs, and China even summoned the German ambassador after Joshua Wong's recent meeting in Berlin with the German Foreign Minister.

US Senator Marco Rubio, an ally of Donald Trump, hailed the Hong Kong mobilization as one of "Larger movements (…) than we have seen from recent memory". Co-leader of the Congressional Committee on China, which organized the hearing, he added that he was "More than a great time that the United States and the free world respond to it".

Big Ben's bells will not ring for Brexit, but a giant tally will appear at 10 Downing street

11 Americans who had Hurt in Iran's Missile Strike, Military Says, at Trump Trophy

Berlin tries its luck on the Libyan dossier