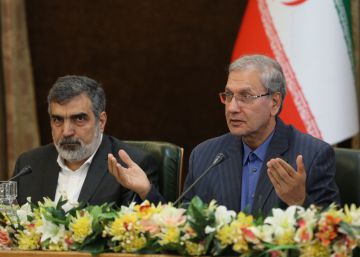 Iran continues to tighten the nuclear cord. In addition to confirming on Monday that he has already enriched uranium above 3.67%, as he said the day before, he announced new steps towards the reactivation of the atomic program limited by the agreement he signed in 2015 with the great powers and of which has obtained the expected benefits, after the abandonment of the pact by the United States. Determined to defend their rights, and perhaps betting that Washington's pressure will not go any further, it now threatens to restart the sealed centrifuges and enrich the uranium to 20% purity.

It refers to the Bushehr plant, its only commercial reactor, in use since 2013, and where it is building two other reactors with the aim of expanding its capacity. From the beginning it has been fueled by Russia, whose public company Atomstroyeport was responsible for its construction. To generate electrical energy, it needs to enrich uranium around 5%, but it is not enough since it is required to encapsulate it in bars and reach a sufficient level of production to guarantee the supply. Iran claimed to have managed to manufacture those bars by the end of 2011, but never had enough fuel for its power station.

The Iranian regime has felt cheated by the US that, after the arrival of Donald Trump to the White House, abandoned the Comprehensive Plan of Joint Action (PIAC, official name of the nuclear agreement) and reimposed sanctions on the country. Consequently, it has not seen the potential benefits of having accepted restrictions on its atomic program and has embarked on a step-by-step process of dismantling the pact as a measure of pressure.

It began surpassing on July 1 the low enriched uranium limit that the PIAC allows it to store. It has continued to increase the level it enriches and now, according to Kamalvandi, the authorities are debating what the next steps will be if they do not achieve their objective of being able to sell oil (something that prevents US sanctions, since it punishes countries that buy the Iranian crude).

"There is the option of 20% and there are other options greater than that, but everything in its time," admitted the OAS spokesman, who also mentioned as a possibility the start-up of the IR-2 and IR centrifuges. 2 M.

The centrifuges are the machines where the uranium is introduced to enrich it. Increasing the purity of the ore requires more centrifugation time or a larger number of machines. A greater number and sophistication of these, you also get a greater amount of that fuel, with a purity of 90% can even serve to make a nuclear bomb.

Hence, when the UN inspectors verified in 2012 that Iran had managed to enrich uranium to 20% alarms were unleashed. This level of purity serves to feed research reactors and manufacture medical isotopes, but it also allows military-grade uses to be achieved in a short space of time. The PIAC succeeded in getting Iran to dismantle its most advanced centrifuges (the IR-2M) and to dispose of its 20% enriched uranium stocks. Under the 2015 agreement, only two of those machines can be operated for mechanical testing.

So far, the steps taken by Tehran have been minor transgressions of the agreement that show their discomfort with the lack of counterparts and has managed to avoid appearing to repudiate it. But as President Hasan Rohani announced in early May, if they do not get results, his plan is to increase the pressure with new measures every 60 days.

The accumulation of infractions can not only end up emptying the PIAC content, but it increases the pressure on the European signatories (United Kingdom, France and Germany), who have tried to defend the agreement and distance themselves from the United States. If one of the three decides to invoke the dispute resolution mechanism, Iran can be seen again before the Security Council and US sanctions become international.