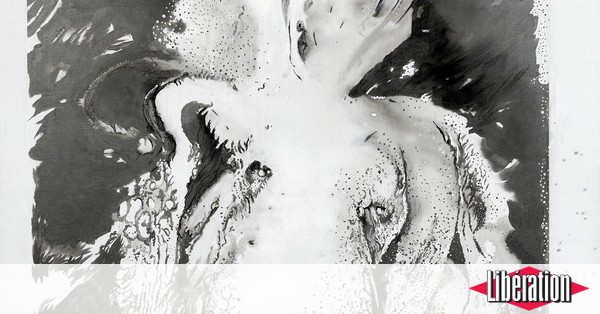 If the pitch of Julien Tiberi’s exhibition seems a priori as crystal clear, the dark designs are much less so that this obscurity which engulfs them drools back on the initial idea. That’s it: drummer in the last show of the Zerep company, volcano bats, the artist has taken it into his head to transcribe his point of view graphically on this show staged by Sophie Perez with the collaboration of Xavier Boussiron, because there is a moment when he is asked to stick to the deviation from his instrument.

“I had to do something, He explains, from this position where, during the first fifteen minutes, I am a spectator of the picture that begins and that I will cross, in a slightly contemplative posture, but as if on adrenaline. ” However, he does not intend to tell the spectacle, nor therefore deliver a graphic novel. After the first performances in 2018, it takes four months to remember a very small part of it, exactly four seconds. Because at the outset, it was a 96-page book project, and its development was thought of as that of film, with 24 frames per second. Without images before his eyes, without notes, Julien Tiberi immerses himself in his memories (of lighting, artificial smoke bathing the scene and the characters) and lets happen “On the contemplative space of the white sheet, visual graphic impulses”. Then it’s a “Four months of improvisation experience”, where what he saw or experienced comes back “With the hand”, with the drawing. However, he prepared for it. He knew he would need “Dramatic plans” which would correspond to the theatricality of its subject. He therefore potashed the engravings of the beginning of the XXe century by Alfred Kubin and their macabre monsters, the futuristic boards of the 1950s by Virgil Finlay which illustrated in particular SF by Lovecraft and then films by giallo. Tiberi’s drawings cite these sources only behind the scenes, under a haze of very dense black ink, beaded with sparks of white reminiscent of the mirages of a hallucinated vision and the mechanics of improvisation during which “Lots of things are coming up. In the blacks, we perceive things inscribed, but hidden. But it is also the very device of the theater. We see things, even in the dark ”. A nocturnal look that cultivates the Volcano Bats.

Another common point, with the theater – a bit distant but not as anecdotal as it seems – is the latex (liquid), which Tiberi spreads on his sheet before coating it with ink, then with remove the dried particles: it thus obtains its light from the latex, which the theater makes its masks… Besides, the drawings are, and it is also true of the book, printed on a thick and porous paper, pulpy, this very organic texture and humid, summed up by this giant octopus species which slowly snorts on one of them. Finally, all this progress, technical and mental, as well as the exhibition allow us to measure that “The works are larger than the physical space they occupy”. The show, initial support, leaves the stage towards the exhibition, and this one of the picture rails to join the book.

MLB spring training: Miguel Andujar, Joey Gallo and other key players who will change positions in 2020