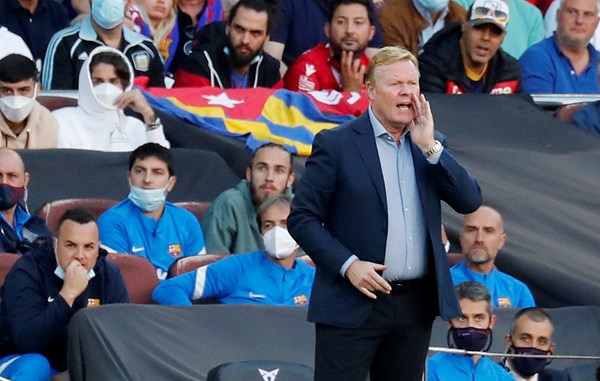 Barcelona coach Ronald Koeman said Tuesday that the people who offended him outside the Camp Nou after the end of the Clasico, with the Catalan club losing 1-2 to rivals Real Madrid on Sunday in the Spanish Football League, “do not know what morals and values ​​are.”

Koeman confronted a group of fans while he was trying to leave the stadium in his car after the loss in “La Liga.” Some of them insulted him and others kicked his car.

The Catalan club condemned the incident and published a statement denouncing the “violent acts and contempt” against Koeman, one of the club’s legends, as he contributed when he was playing in its ranks as a defender famous for his missile shots, by winning his first title in the European Champions League, by scoring the winning goal in the 1992 final.

For his part, Koeman said in a press conference held on the eve of his upcoming match against Rayo Vallecano in the eleventh stage of the league: I do not think there is any solution,” adding: For me, it is a social problem, they are people who have a cultural problem, and they do not know what morals are. and values.

“But the atmosphere on the pitch, even when we were 0-2 behind, was otherwise, and we shouldn’t pay too much attention to these people.”

“I wasn’t afraid, there was a moment when I said I’m going (off the field), but the best thing is that I didn’t.” I understand that people are not happy, but you do not expect that.

The defeat against Real added to the misfortunes of Barcelona, ​​which is ninth in the standings with 15 points, to be 6 points behind the leaders Real Sociedad, but with a game less for the Catalan club. The Blaugrana team will embark on a perilous journey on Wednesday, when it faces its host Rayo Vallecano, who bolstered his ranks by signing the 35-year-old Colombian striker Radamel Falcao last summer, to score the latter 3 goals in 5 games, which reflected positively on the team’s results, as it occupies Seventh place with 16 points.

Koeman admitted that his opponent is in a good position, they are aggressive and have made a great start to the season and we have to be careful. Barcelona will suffer a painful blow if their player Ansu Fati does not participate after being substituted in the second half on Sunday, but Koeman indicated that this substitution had nothing to do with a knee injury that kept the 18-year-old out of action for about a year.

The Dutch coach said: He was feeling some discomfort, but not because of the injury he suffered, and doubts still swirl around him. We put him on the squad and tomorrow morning (Wednesday) we will decide if he can fly with us.

On the other hand, the newcomer, Argentine striker Sergio Aguero, opened his scoring tally in his new team’s shirt, by scoring the goal to reduce the difference against Madrid, after recently recovering from a calf injury. On the return of the former Manchester City striker to score the net, Koeman said: He has been training for two and a half weeks and has improved a lot physically.

He concluded: He is still not ready to play for 90 minutes, but he can start the match or enter the second half.

Belgium is considering corona measures for the fourth wave