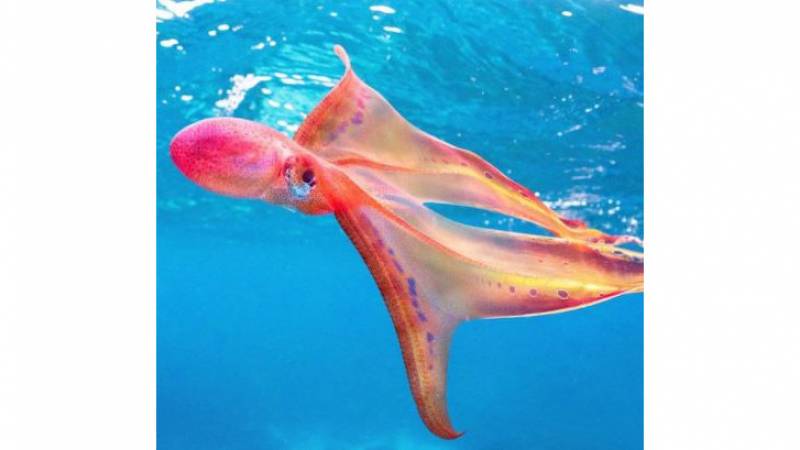 Shackleton spotted the octopus off the coast of Lady Elliot Island in the Great Barrier Reef. “I kept screaming through my snorkel, ‘It’s a blanket octopus!’ I was so excited I found it hard to hold my breath to dive down and film it.”

Blanket octopuses are rarely found in the wild. According to Shackleton, the octopus has only been sighted in the same area three times before. A blanket octopus generally spends its life cycle in the open ocean, so it’s even more unusual to discover one on the reef.

The first time a live male was spotted was 21 years ago. There is also a big difference between male blanket octopuses and females. While females grow up to 2 meters in length, the males do not get further than 2.4 centimeters. A female can be up to 40,000 times heavier than a male, a weight difference between the sexes that is greater than in any other animal in the world.

“I was so fascinated by the movements, it was like the animal with a billowing cape was dancing through the water,” says Shackleton. “The vibrant colors are so incredible you can’t take your eyes off them. I’ve honestly never seen anything like it and I don’t think I’ll ever see it again in my life.”