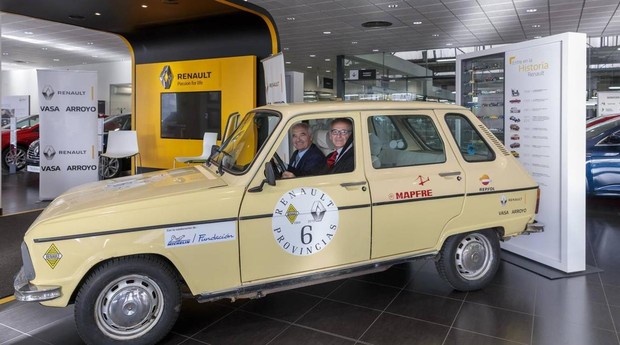 On radio and television, "Tell Me" of Formula V sounded; the Beatles who gave their last live concert that year (on the roof of number 3 on Savile Road), published the album Abbey Road; the Oscar for Best Film was taken by "Midnigth Cowboy", while Chicho Ibáñez Serrador terrified in movie theaters with "La Residencia"; Ramón J. Sender won the Planeta prize with the novel "In the life of Ignacio Morel"; Nixon became the thirty-seventh president of the United States; and Prince Juan Carlos de Borbón was designated as King as successor in the Head of State.

And it was the year in which the unforgettable Jesus Hermida told us the Spaniards through the small screen as Neil Amstrong took a small step for man and a very big one for humanity, on the floor of the moon.

In May 1969, the then Renault FASA presented the R6 at the Barcelona Motor Show. This model was born in France a year earlier in order to offer users of the successful R4 a model of front-wheel drive, more modern, less rustic, and with a body style that followed the lines of the upper R16.

Unlike the French, the Spanish R6 had a more displacement engine, 956 cc, from the R8, and with 38 horsepower. To celebrate its 60th anniversary, the «Renault 6 provinces» challenge has been conceived.

This is a “non stop” route of more than 600 kilometers with departure and arrival in Valladolid, which will take place on November 19, 2019, in a Renault 6, leaving at 8:00 from the Renault Arroyo dealership in Arroyo de Commendation and arrival at these same facilities at 10 pm.

This challenge, very much like those that took place in the fifties and sixties of the last century in Spain, celebrates the fiftieth anniversary of the birth of Renault 6 in Spain, a family car and that, at the time, served many professionals in its day to day, a model that represents values ​​such as simplicity, hardness and the vocation of service. And that lent many Spaniards the value of mobility.

The Renault 6 unit to be used was manufactured in Valladolid and is registered in 1985. It has been preserved in its original state, maintained according to the manufacturer's program, and is not restored.

In the same will travel, alternating behind the wheel, Santiago de Garnica Cortezo, specialized journalist of the motor world and José Luis López Valdivielso, CEO of the Renault dealers of Valladolid VASA and Arroyo.

The version they will use is a GTL of the year 1985, so it already has a 1108 cc (Cleon Fonte) engine, and it is easily distinguishable from the front, of the models before 1974, by its square headlights instead of round.

The Renault 6 was a vehicle for family use although its large capacity would also be used for work by many professionals. His trunk already 335 liters, knocking down the back seat went to 1,190 liters.

His career was very long and until no less than 1986, his production was maintained in Valladolid. . (tagsToTranslate) anniversary (t) renault (t) 6

Athletics: imbroglio around the Euro in Paris