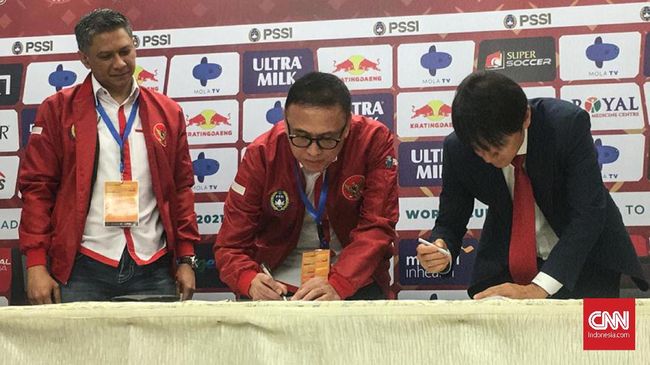 Shin Tae Yong face the harsh reality because Indonesian National team could not be strengthened by the best player from the South Korean coach’s version when appearing in the 2020 AFF Cup (2021) December.

The old formula when the AFF Cup took place, was re-applied by PSSI. Shin is only allowed to choose a maximum of two players per club for the biennial Southeast Asian championship. Shin’s freedom was restricted by the federation.

This achievement then became a kind of hypothesis for PSSI and club officials with a policy of two players per club which became a peaceful way with the club because the competition was still running, the Indonesian national team could still perform optimally.

“Many have raised objections to us, such as yesterday that Persebaya was taken by four, Persib was also the same, so it was decided that the maximum is two players per club, and Shin Tae-yong has agreed with that.”

“Sometimes the remaining players are like taking four clubs, sometimes two are not used, so it’s a pity for the clubs whose players are quite potential or good enough at the club,” said PSSI General Chair Mochamad Iriawan, Wednesday 10/11).

The concept that the national team is a collection of the best players from a country according to the coach’s version, has actually been embodied by PSSI and this country’s football club. The history of the AFF Cup, where the coach’s freedom to choose the players that won’t end, is a kind of argument.

Since the inaugural edition of the AFF Cup in 1996 until the 2014 edition, there has always been a club as the biggest contributor to the Indonesian national team. In the 1996 edition Persebaya and Persipura contributed three players, then in 1998 Persebaya dominated with 11 players.

Shin firmly stated that the policy of only being able to call up two players per club for the Indonesian national team was detrimental. However, the former South Korean coach at the 2018 World Cup still sets the target of winning in Singapore.

“It is indeed detrimental to the Indonesian national team, but the development of Liga 1 is also needed, so that Indonesian football is more advanced. [Untuk saat ini] we relented, but there was an agreement with the League, [klub] want to release more than two players for the AFF Cup,” said Shin.

Shin adhered to his stance that the AFF Cup 2020 was one of his promises during negotiations with PSSI. At the end of 2019, Shin was chosen by PSSI over Luis Milla Aspas because he was sure he could meet PSSI’s target of winning the 2020 AFF Cup.

Unfortunately, when Shin kept his promise, PSSI was half-hearted. PSSI, who asked for the champion, made restrictions. Shin’s right to summon players deemed fit for his main character was amputated in the name of the competition.

Continued on next page…

This location on the moon is NASA’s target to drill, for what?