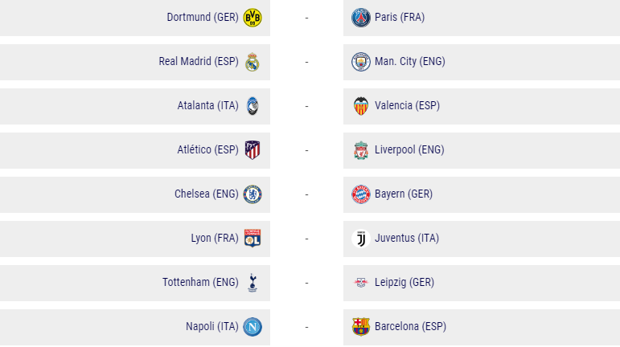 Two English and two Italian teams in a random draw for Spanish teams. Real Madrid, which will face Manchester City of Guardiola, and Atlético, which will be measured with Liverpool, current champion, were the two teams that came out worse in the draw for the round of 16 of the Champions League.

It was better for Valencia and Barcelona. Those of Celades will be measured at Atalanta, while the Catalans will do it against Naples. Advantages of having finished as first group. Both will also play the games back at home.

Atlético and Liverpool have met four times in Europe, with a balance of one win for each team and two draws. The two matches were produced in the group stage of 2008, two 1-1. The next match was in the semifinals of the 2010 Europa League. Atletico won 1-0 in the first leg, and qualified for the final after Liverpool's victory in the 2-1 lap, after a game that went to the extension and that the Athletic one solved with a bit of Forlán.

Manchester City and Real Madrid have also played four times before. Both faces were seen in the group stage of the 2012-2013 season. Real Madrid won 3-2 at the Bernabéu and drew 1-1 at Etihad.

Afterwards, both teams met in the semifinals of the 2015-2016 season, with a favorable result for Real Madrid, who drew 0-0 at Manchester and resolved in the return with a goal from Gareth Bale.

The other double duel will be between Italians and Spaniards: Naples-Barcelona and Atalanta-Valencia. These are two unprecedented clashes in Europe.

In the absence of knowing the final calendar of the eighths, the first leg will be played in the weeks of February 18/19 and 25/26, while the return matches are scheduled for the weeks of 10/11 and 17 /March 18th. .