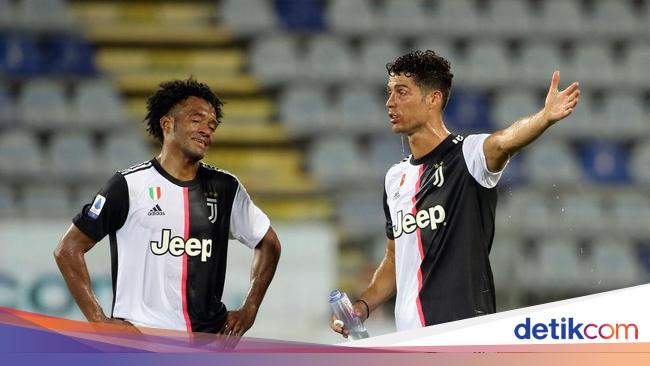 Cristiano Ronaldo apparently had an argument with Juan Cuadrado while at Juventus. This is how the story goes!

The clash between the two occurred in the second leg of the Champions League last 16 when Juventus hosted Porto. The Old Lady, who was on a mission to avenge a 1-2 loss in the first leg, fell behind 0-1 in the first half.

In the dressing room at half-time, Ronaldo was furious with his team-mates. The moment was documented by Amazon Prime under the title All or Nothing, which can be seen by all football lovers.

Ronaldo urged his team-mates at Juventus to work harder in the second half. Cuadrado was then annoyed by Ronaldo’s words and turned them all back on the Portuguese star.

“We have to work harder. What the hell! We don’t play at all! Our game sucks, it’s always like that!” said Ronaldo in the dressing room, quoted from Corriere dello Sport.

“You have to be an example to everyone”, said Cuadrado directly face to face with Ronaldo.

“I’m included too. We have to tell each other the truth, we played badly. It’s a Champions League game,” Ronaldo chimed in.

The bickering between the two players finally stopped after Andrea Pirlo, who is currently the coach, separated. The dispute ended and Juventus got back up by scoring two goals through Federico Chiesa to make the match go to extra time 2×15 minutes.

Juventus had bad luck in extra time because Porto were able to equalize the score before being quickly replied by Adrien Rabiot’s goal. A 3-2 victory was not enough to make Juventus go and have to be willing to be kicked out.

The Bianconeri’s great bitterness also appeared in the documentary after the match. Cristiano Ronaldo returned to the dressing room in tears and then won in the room.