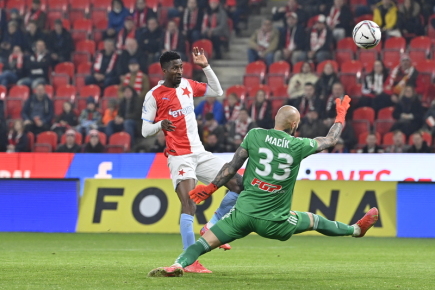 Prague – The footballers of Prague’s Slavia won the overtime of the 3rd round of the first league over Olomouc 1: 0 and finished the second Sparta in the table. Defenders of the title lose four points to the leader Pilsen, who they will welcome in Eden in Sunday’s hit. Today’s match was decided by Peter Olayinka in the fifth minute. The match was postponed in the original August term after Slavia asked for more time to prepare before the retaliation of the 3rd qualifying round of the Champions League with Ferencváros Budapest.

The Red and Whites won for the second time from the last six competitive duels, but they scored at home in the league in 55 consecutive matches. Olomouc was defeated for the third time in the last four matches of the highest competition and remained seventh in the table.

Recently, the uncertain goalkeeper Kolář was replaced in the Slavic goal by Mandous, who came to Eden from Olomouc, but he didn’t have much work to do at the beginning. The people of Prague started actively, the guests themselves helped them significantly to lead. Poulolo placed the ball out of reach for the home side’s keeper after a fine move, coming in from the left. The Nigerian winger scored in the third consecutive league match.

In the 10th minute, Kuchta knocked the ball into the goal, but the goal did not pay due to the previous offside. In the middle of the first half, the author of the goalie Olayinka had to change due to an injury and was replaced by Lingr. A fresh midfielder shot past Macík in the 28th minute, but the Slavists were again spoiled by the previous tight offside. In the 38th minute, he headed outside Kucht in a good position.

The top scorer of last league season failed even two minutes after the break, when he finished a solo escape just outside. 10 minutes later, another attacker, Schranz, aimed inaccurately in front of Macík.

After an hour of play, Kuchta missed again. In the middle of the second act, Sigma was also threatened, but Daňek’s wound was scraped by Mandous. Six minutes before the end, the Slavists threw away two more big chances, the Olomouc goalkeeper Macík was not overtaken even by the alternating Krmenčík. In the end, the home team didn’t have to regret the options so much, they have already kept the seventh win from the last eight league matches with Olomouc.

Votes after the match:

Jindřich Trpišovský (coach Slavia): “We entered the match well, a quick goal also helped us. After a long time, we managed to score a goal from the first situation and get into the lead quickly. Overall, our performance was very good towards the defense. The man of the match was Aleš Mandous, who worked in We created a lot of chances for the offensive, from which we were able to calm the match with a difference. second half and some minor injuries that forced us to take turns. I’m glad we made it, that we won. But I’m sorry that no more goals were scored. The victory was supposed to be two to three goals. “

Václav Jílek (Olomouc coach): “We went to the match in order to be very active and not allow our opponents to score at the beginning of the match. Unfortunately we did not fulfill the basic goal and we let Slavia into the lead with a very cheap goal. Slavia dominated, until the second half there was a great appeal from us to increase activity, courage in offensive activities, so that we are not afraid to work with the ball under pressure. “We didn’t make it. On the other hand, I have to admit that Slavia had at least two hundred percent situations and could have decided the match sooner. Slavia had her chances, but I’m sorry she won the goal after our huge mistake.”