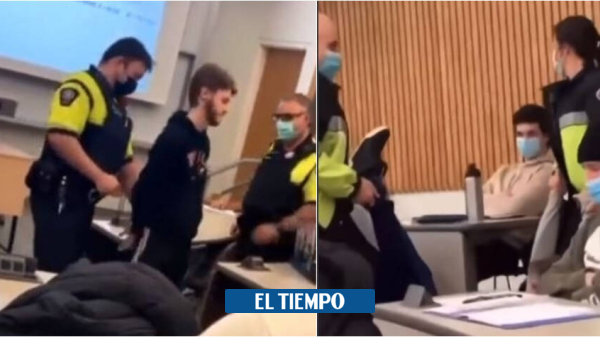 With handcuffs and dragged out by guards: this is how a student was removed from a classroom because he did not have the vaccine against covid-19 and by not wearing the mask.

The case was presented a few days ago in the Western University, Ontario higher education institution, Canada.

The video was initially posted on the social network Instagram by Western Savages, a profile of university students. The footage shows two security officers handcuffing him and removing him from the classroom.

(You can read: Bayern footballer will not be able to play important matches for not getting vaccinated).

“Arrested for the second time after attending an Engineering class, second year, without being vaccinated and without wearing a mask”, They wrote in the description of the video that exceeded 50 thousand reproductions.

Days later the same account published a video in which other security people are seen removing the student again. Only this time they were holding him by hand and foot.

Western University expelled the young man from the videos and other people for breaking the rules.

“28 students (out of a total of approximately 37,000) have been placed on involuntary leave due to non-compliance,” the institution said in a statement to the Canadian news network ‘Global News’.

In addition, they emphasized that the students had been contacted insistently through calls, emails and messages to warn them about the need to be vaccinated.

What did the expelled youth say?

The protagonist of the videos is Harry Wade, 22, who does not think it is necessary to be vaccinated. He was arrested for the first time on November 10.

“I was going to class, I had paid to be on campus. (…) They said that I couldn’t be there and I insisted that I should, but they arrested me, ”said Wade, speaking with ‘Global News’.

The next day he attended class without the card that will show his immunization and without a mask. However, the teacher called security.

(You can read: They capture a young man who earned thousands of dollars falsifying covid certificates).

“I was expelled and it will last for the next five years, as I understand it. That includes all Ontario universities, if they all decide to abide by the expulsion, ”he commented.

Western University regulations, as recorded on its official website, indicate that from October 12 “everyone who attends campus must show proof of complete vaccination, including visitors.”

In addition, the university, in accordance with the regulations of the authorities of Ontario, Canada, requires that everyone carry face mask three-layer on the premises.

To comply with the rules, the institution has mask dispensers and a testing and vaccination center for its academic staff.

According to information on its website, 99 percent of the campus community is already vaccinated against covid-19.

(We recommend: They identify the mutation of the delta variant that makes it so contagious).

It is worth remembering that World Health Organization (WHO) has not established mandatory vaccination to prevent the spread of the coronavirus.

“Countries must follow a risk-based approach, adapted to their local circumstances and preferences, while defending human rights,” said Tarik Jasarevic, WHO spokesman, in statements quoted by the agency ‘EFE’.

– These are the phrases that people say the most before dying, according to a nurse.

– ‘I got married, but I have never been able to forget my love from school’.

– The places where it would take you the longest to buy an apartment.

– Some Nazi symbols present today that have caused controversy.

– The dreaded murderer who must have locked underground in a glass box.

Protest march against housing shortage in Utrecht: ‘Code black on the housing market’

OM interrupted LIVE: Six months in prison required against the author of the bottle throwing on Payet