The Director of Media and Communication for the Machfud-Mujiaman Winning Team, Imam Syafi’i, said that Machfud-Mujiaman was supported by all elements of society starting from groups of scholars, millennials, academics, cultural observers or by people from various backgrounds.

“The variety of party support is evidence of the great support of the people. The Machfud-Mujiaman coalition is proof that advancing the region must be done through collaborative work or collective work,” he said. 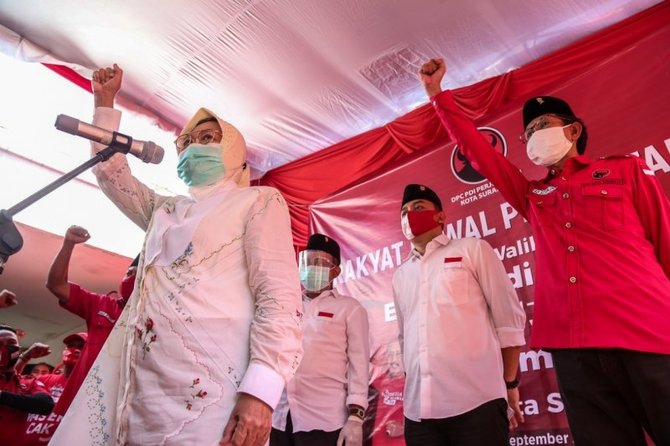 This pair challenged the champion who was promoted by the PDI-P and supported by the Indonesian Solidarity Party (PSI). Namely the pair of candidates for Mayor and Deputy Mayor of Surabaya, Eri Cahyadi and Armuji. The pair were paraded by hundreds of supporters when registering at the KPU office in Surabaya Jalan Adityawarman, Surabaya City, East Java, Friday (4/9).

The deputy mayor of Surabaya Whisnu Sakti Buana was seen accompanying Eri and Armuji when registering as participants in the Surabaya Regional Head Election (Pilkada).

The DPC of the Indonesian Democratic Party of Struggle (PDIP) in Surabaya has targeted that the pair of candidates for mayor and vice mayor for Surabaya, Eri Cahyadi and Armuji won in 31 sub-districts.

“We haven’t calculated the percentage. But overall we are targeting to win in 31 sub-districts,” said Adi Sutarwijono, chairman of the PDI-P DPC Surabaya City, while registering the Eri-Armuji candidate pair at the KPU office in Surabaya, Friday. [noe]

The widower arrives at a female guest in the middle of the night, when someone finds out it’s someone’s wife