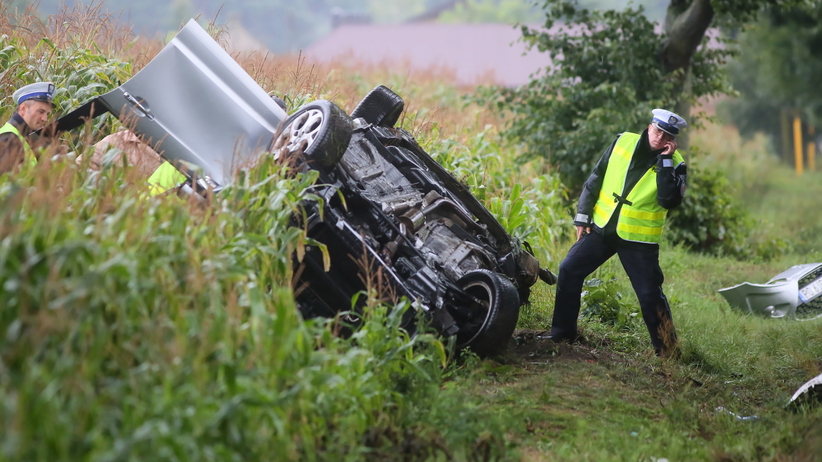 The bride and groom who died in the accident in Świeca (Greater Poland Voivodeship) will be buried in one grave, PAP found out. Martyna and Bartosz had an accident when they were returning from the wedding hall inspection the day before the wedding ceremony.

Martyna and Bartosz died on August 31 on the provincial road number 444 in Świeca. They were returning from the wedding hall, where over 100 guests were supposed to play. From preliminary findings the police it appears that the Citroen with the fiancées in the middle drove partially to the side of the road and positioned himself sideways on the road. The side of the passenger car was hit by a truck approaching from the opposite side. The car went off the road and stopped in a cornfield.

The bride and groom died in accident at location. Truck driver – as the spokesman of the Ostrów police, young asp. Małgorzata Michaś – was tested for sobriety; no alcohol was found. His blood was taken for research.

The bride and groom died in an accident. Funeral of Martyna and Bartosz on Saturday

Initially, the funeral ceremony was planned for next week, but on Thursday the prosecutor’s office in Ostrów informed the relatives that the bodies were to be collected on Friday. It was decided that the funeral would be held on Saturday.

The funeral will take place on September 4 at 11 in the church of St. Anna in Niedźwiedz near Ostrzeszów. This is where the 26-year-old Martyna comes from. It was in her parish on September 1 that the girl was to marry 32-year-old Bartosz, who comes from Kotlin, 70 km away. It was the second date of their wedding. The first was canceled due to restrictions related to the coronavirus pandemic.

The bride and groom lived in Poznań and they had their future in this city. Bartosz defended his doctorate at the University of Adam Mickiewicz in Poznań. He was an assistant professor at the Department of Agricultural and Rural Geography at the Faculty of Social and Economic Geography and Spatial Management at AMU.

“With deep regret and disbelief, moved by the enormity of the tragedy, we would like to inform you that on August 31, 2021 our unrepented friend and colleague, Dr. Bartosz Wojtyra, died tragically” – the department informed in social media, which also announced the date of the funeral ceremony.

Bartosz’s tutor from the gymnasium school in Kotlina, Włodzimierz Szymkowiak, told PAP that his former student “was a great boy, he always wanted to be a scientist”. The last post of Martyna on her social profile from August 20 reads: “We are happy to announce our wedding. We will be pleased to see you on this special day”.

The Prime Minister of Japan will be replaced!Yoshihide Suga throws a shock bomb to give up re-election-Free Times Newsletter

The Doctors Covid Collective: corona skepticism in a white coat