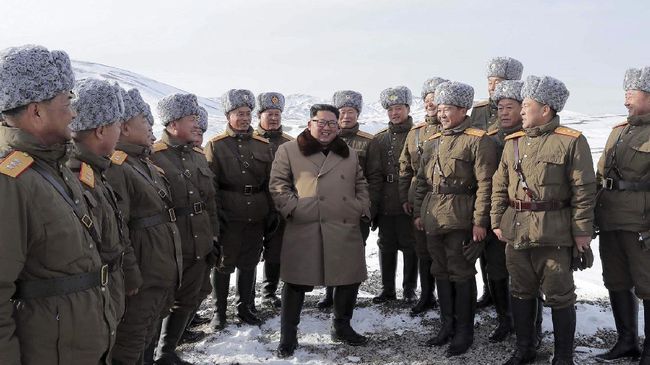 Food crisis from North Korea (Jewelry) which has been going on since the second quarter of 2021 is reportedly getting worse.

The increasingly acute food crisis is marked by the soaring prices of a number of basic necessities.

At the end of last June, in the capital Pyongyang, the prices of some basic goods were reported to have skyrocketed.

Quoted CNN, experts said rice and fuel prices were relatively stable but imported staples such as sugar, soybean oil and flour prices were creeping up.

Residents say the price of potatoes has tripled at the Tongil market.

Residents also revealed that non-essential items such as a small packet of black tea can be sold for around $70.

The country led by Kim Jong-un is reportedly in danger of running out of basic food. Kim Jong Un also acknowledged that the worsening food crisis is feared to be as bad as in the 1990s when his father, Kim Jong-il, was still the country’s supreme leader.

“The food situation of the people is getting more and more difficult because the agricultural sector failed to meet the grain production plan, due to the damage caused by last year’s typhoon,” Kim told a meeting with the central committee of the Workers’ Party, the North’s state media quoted him as saying. KCNA, Tuesday (15/6).

Some of the causes of the food crisis that occurred this year were weather conditions that were not sufficiently supportive. North Korea had experienced a decrease in rainfall and made the country have to postpone their planting.

Not only that, North Korea has experienced typhoons and heavy rains that have resulted in some areas of the country being flooded or having too much soil moisture. As a result, North Korea’s crop yields are drastically reduced in the midst of an unsafe food supply.

Unlike his father, Kim Jong-un has so far tried to deal with North Korea’s food crisis in an unconventional way.

At the end of last October, Kim Jong-un announced a new policy to encourage his citizens to breed black geese and rabbits as alternative food.

Not only that, the North Korean government is also said to have ordered people to save money and eat less until 2025.

“The food situation right now is already serious and people are suffering. When the government asks people to save money and eat less food until 2025, they can’t do anything. They can only be sad,” said an anonymous resident on the website. Radio Free Asia.

Despite being in a crisis, Kim Jong-un insisted on refusing international assistance, especially from the United States in the midst of the Covid-19 pandemic and the acute food crisis that hit his country.

One of the North Korean Foreign Ministry officials called American aid, including vaccines and other aid, an evil political scheme to pressure other countries.

“This clearly reveals that America’s hidden intention to link ‘humanitarian aid’ to ‘human rights issues’ is to legitimize their pressure on sovereign countries and achieve their evil political schemes,” Kang said on the North Korean Foreign Ministry’s official website on Monday ( 12/7).

For example, Kang alluded to the decline in U.S. aid to Afghanistan following the withdrawal of Uncle Sam’s State troops from the South Asian country.

“In actual practice, many countries have experienced bitter taste as a result of pinning much hope on America’s ‘aid’ and ‘humanitarian aid’,” Kang said.

Kang Hyon Chol, a senior researcher at the Association for the Promotion of International Economic and Technological Exchange, North Korea’s Ministry of Foreign Affairs, said that a series of US foreign aid has always been followed by its foreign policy interests, such as pressure on human rights enforcement and Pyongyang’s nuclear program.

Tesla is the second most faulty car today, but electric cars are also harmful to others

International research: more than half the spread of coronavirus due to mouth caps Inland