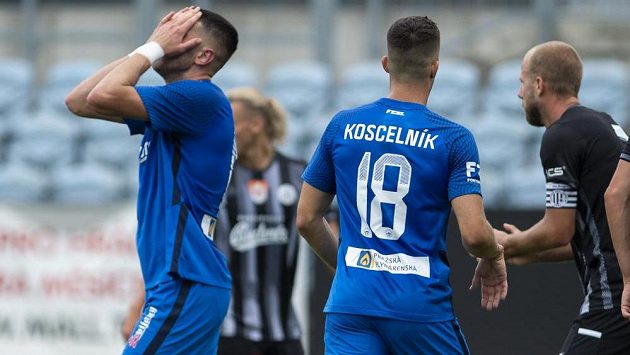 From left Michal Fukala from Liberec and his teammate Martin Koscelník. Illustrative photo.

Zákostelský sent Zbuzany to the lead at the stadium near Nisa in the eighth minute. Liberec’s chance to equalize was eliminated by goalkeeper Soukup and in the 70th minute Zákostelský increased. In seven minutes, the home team was returned to play by substitute Mészáros, but the North Bohemians, despite the final pressure, did not manage any more and did not avert the embarrassment.

After Sunday’s 0: 4 league debacle with champion Slavia, Baník was unable to break the Hlučín resistance for a long time. After eliminating the home Waka from the 83rd minute, Kuzmanovič threw a penalty in the end. The Ostrava team only got in the 105th minute thanks to the shot of the substituting debutant Smékal.

An alternate in overtime also ended the suffering of Pardubice on the Hostoun field. Sychra decided the progress of the East Bohemian favorite in the 99th minute with the premier goal for the A-team.

Csaplár’s glossary: ​​That Baník was bad? No, Slavia was great! And what about the Kuchta rebel case?

In the first half, the Bohemians 1905 gave a two-goal lead to Fulnek and Novák, who hit even after the change of sides. Köstl and Květ added other goals for the Prague team. The “Kangaroos” received their premier competition win of the season.

For Teplice, which lost four of their five matches so far in the league year, a goal of Fortelný’s goal from the 30th minute was enough to triumph in Benešov.

Zifčák contributed two goals to the Olomouc victory in Hlučín. The 22-year-old striker confirmed his form from the league, where he leads the team table of shooters with three goals. Zmrzlý and substitute Růsek also scored for Sigma.

Only in the 3rd round will the top five from last season of the highest competition – the defenders of Slavia, Sparta, Jablonec, Slovácko and Plzeň – enter the MOL Cup. All these teams presented themselves in the qualification of European cups.

Evidence of undercover officer who committed suicide is not used