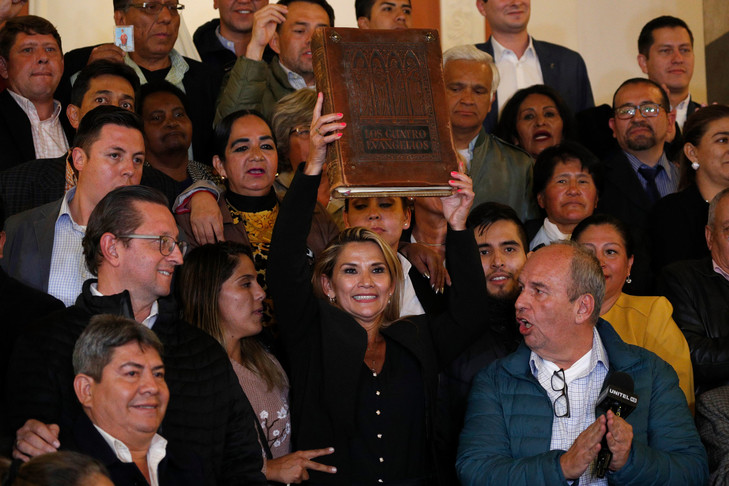 Wrapped in the presidential scarf, it is with two copies of the Bible in hand and under the "Glory to God! That right-wing Senator Jeanine Añez took office as Acting President of Bolivia, replacing Evo Morales, who had announced his resignation two days earlier.

Jeanine Añez, a new face at the head of Bolivia

The 52-year-old lawyer, a critic of former socialist president Evo Morales, who until then served as the second vice-president of the Senate, declared herself on Tuesday [November 12th] to head Bolivia. "The need to create a climate of social peace" in the country shaken by a serious political crisis since the presidential election at the end of October. The Constitutional Court validated his election. From Mexico, where he has entrenched himself, Evo Morales has denounced him "The most astute and odious coup d'etat in history".

"God allowed the Bible to return to the palace. May he bless us! "

"God allowed the Bible to return to the palace. May he bless us! "exclaimed Jeanine Añez as she crossed Tuesday, November 12, the doors of the presidential palace in La Paz. She then went to greet the crowd from the balcony with, in hand, another Bible, slightly smaller.

The resignation of Evo Morales plunges Bolivia into uncertainty

This move marks a break with the changes imposed by former President Evo Morales. When he came to power in 2006, Bolivia's first indigenous president put an end to the practice that government officials and officials take office by swearing on the Bible "for God and the Fatherland" and then sign. Evo Morales had made Bolivia – which is 76% Catholic and 17% Evangelical Protestant – a secular state through the adoption of a new constitution in 2009. He had during his first term adopted a very critical rhetoric vis-à-vis of the Catholic institution, estimating "That the Church in Bolivia is the main enemy of the reforms", and "Political transformations"even going so far as to say that the Catholic institution had kept a "Colonial mentality".

"Religion is used as a lever to mobilize different electorates"

"It's not trivial this return of the Bible in politicsexplains Catherine Delfour, professor at the Paris Est Marne la Vallée University, a specialist in Bolivia. In the Bolivian collective imagination, especially Indians, Catholicism is associated with the white oligarchy and the colonial legacy. On the other hand, on the side of the Bolivian middle class, it was interpreted as a symbol of appeasement after days of violence, when the police had disappeared from the streets. In this category, it is a unifying symbol that calls for living together in the country. "

Presidential election in Bolivia: the contested victory of Evo Morales
The new Bolivian president is not the only one in the national political class to have brought the Bible back into the political arena. The regional leader Luis Fernando Camacho, the most radical of the Bolivian opposition, thus launched himself after the vote in an anti-Morales crusade by announcing that he would go to La Paz to the presidential palace the Holy Scriptures in hand for in to dislodge the former president, who declared himself the winner of the ballot.

This vote, tainted with suspicion of fraud, was also an opportunity to assess the political strength that evangelical Christians gained, in the light of the outcome of candidate Chi Hyun Chung, a Presbyterian pastor of Korean descent. A fierce opponent of abortion, extreme in his comments on homosexuals, the candidate of the Christian Democratic Party won 8.8% of the vote, placing him in third place behind Evo Morales and former centrist president Carlos Mesa.
"Many claim that Chi Hyun Chung's candidacy was actually pushed by Evo Morales to counter Catholicssays Catherine Delfour. This is a great novelty, launched by this election. Religion is used as a lever to mobilize different electorates. "

Parisians will choose between a mayor of Spanish or Maghreb origin