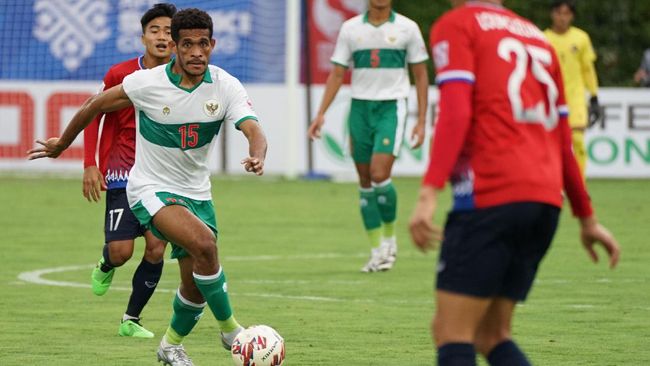 Nine years ago, Ricky Kambuaya was once encouraged to explore his football talent so that he could enter Indonesian National team and play together Evan Dimas.

Ricky and Evan have become the pillars of the Indonesian national team’s midfield for the past year. Both are regular players who are often called by coach Shin Tae Yong.

Unlike Evan, who has been in the media spotlight for almost a decade, Ricky in 2013 was a nobody. Just like most people, this player from Sorong is just a fan of the Indonesian national team.

“National team means, I think so, huh? The meaning of pride is huge, I’m confused about what to say how again, because the dream was not thought,” said Ricky when he was asked about the meaning of the Indonesian national team on PSSI’s official YouTube channel.

Ricky also told a story from the past when he was a teenager and witnessed Evan Dimas’ work with the U-19 Indonesian National Team.

“Until there is a story, there is a complex brother whose name is Brother Jordan, we used to watch Evan Dimas play U-19, he was good, the tops. So watching that, I haven’t played football yet. [waktu itu], still in Papua alone.”

The former Mojokerto PSMP player said that his relative adored his game and thought it suited Evan’s style.

“I just laughed and laughed. Just said, ‘Ah, it can’t be that far.’ But in the heart must be willing, must be determined to [main bersama] Evan. It’s because the age is not much different from Evan either, so why can’t it? So far, how do you feel? I want to say that it’s a dream right now, seeing Evan, it’s like he still remembers that moment, he told me,” said Ricky, reminiscing about the past.

Ricky, who is now the mainstay of the Indonesian national team, started his career at a club located in a village or complex. The player who was born on May 5, 1996 was then selected to join the West Papua PON team in 2016 before pursuing a career in the PSMP Mojokerto Putra team, PSS Sleman, and now taking shelter in Persebaya Surabaya.

Over the past year or so, Ricky has become an important part of the Garuda squad. Ricky has played 12 times and contributed three goals for the Red and White team, against Taiwan, Myanmar and Thailand.

“It feels proud. Thank you, praise God, with God, with family, with Persebaya family, which family is it?” support which all this time. Until I was directly selected this year coach for the first time to join the national team. I feel proud, happy, it’s very extraordinary,” concluded Ricky.