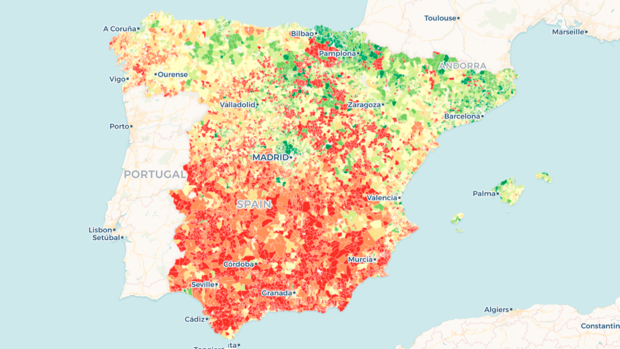 Nationally, Madrid is a turning point between the inhabitants of the northern half of Spain and those of the southern zone. In the capital there is an invisible barrier, a marker of economic inequality, but it is not the only one. There is more to one side and another of the city. And in the same way it happens in other parts of Spain where borders are not only bounded by roads, rivers, streets or avenues, but also by their history.

These components act as markers of inequality and are determined by the average annual income of its citizens: those who have more wealth tend to concentrate on certain points of the city, those with less live in others. It is what can be perceived in places such as Madrid, Barcelona, ​​Valencia, Seville, Bilbao, La Coruña or the Canary Islands. The data published by the INE by census sections, minimum administrative division, allow to know the average annual income of those areas where more than one hundred people live. Due to statistical secrecy, incomes above € 29,364 and those below € 2,897 are not indicated.

Madrid and its border: the M-30
The richest areas of Madrid are in the internal part of the M-30. This ring road, which surrounds the central districts of the capital, is the barrier that indicates the inequality between the central area of ​​Madrid capital with respect to the other districts and municipalities of Madrid. When comparing, for example, the economic situation of the inhabitants of Retiro and Moratalaz, neighboring districts separated by the M-30, the average difference is € 7,560 per year: while the residents of Retiro, the central district, earn an average of one year of € 21,504, on the other side of the road, those of Moratalaz, receive an average of € 13,944 annually.

But in Madrid it is not necessary to cross the road and change district to discover inequality. The street of the same district can mark an invisible economic barrier, in the case of Bravo Murillo, in Tetuán. Towards the Paseo de la Castellana, east of the road, are the neighbors who have an average annual income level close to or greater than € 20,000. Those who live in the western part of the street do not reach an average of € 15,000 per year.

The historic working-class neighborhoods of Barcelona
The level of wealth of the inhabitants of Barcelona is high, with the exception of the working zones of the north and the south. While the average annual income of the city is € 15,343 per person, excluding income above € 29,364 and those below € 2,897, in the southern neighborhoods (Pueblo Seco and El Raval), the average figure is not reached of the city not even in the richest census section.

To the northwest of the city is the district of Nou Barris that, in the same way, stands out for the low concentration of wealth. During the 50s and 60s of the last century it was a reception area for part of the labor immigration that arrived in Barcelona. Now, although it is the district with the most neighborhoods, none exceeds € 15,343, the city's average income. This only happens in two census sections, one belongs to the Canyelles neighborhood and the other to La Guineueta.

Only in two census sections of Nou Barris, the working-class district of the northwest of the city, the average annual income of the city is reached
–
ABC
Seville, wealth and poverty on the same side of the Guadalquivir
The largest rents in the Andalusian capital are in the Old Town, but also in the Nervión neighborhood, one of the most exclusive in the city. In these two areas there are some census sections where neighbors receive an annual average of € 17,164 and € 20,277
respectively. In the Southern District there are also some points of wealth, but they disappear when they reach Polígono Sur, the poorest neighborhood in the city and the country according to the INE. This is where the unofficial neighborhood of 3,000 homes is located, with areas where their neighbors do not earn on average more than € 3,000 annually.

The two Valencias
Economic inequality in the city of Valencia is distributed between the center and the periphery, where, respectively, there are higher and lower incomes. The center is separated from the south and east by two invisible barriers
: the avenues of Peris and Valero and that of Pérez Galdós. Taking as reference the first point, the further south from Peris and Valero, the greater the poverty. From the avenue of Pérez Galdós towards the east, the wealth of the neighbors is also lower compared to those living in the downtown area.

As in Barcelona, ​​certain neighborhoods in northwestern Valencia, such as Benicalap or Rascaña, have significantly lower incomes, as the residents of most census sections in both areas have an average annual income of less than € 9,000.

The Ria de Bilbao embraces the wealth of the downtown district
The course of the estuary of Bilbao passes through the richest area of ​​the city, Abando, its central district. The neighbors of the census sections of the neighborhoods that form it, Indauchu and Abando, are the ones with the highest income. In almost all of its areas, average incomes of more than € 20,000 per year are recorded.

Following the course of the estuary, towards the east, the incomes are decreasing, as well as going back to the west: those who live in these census sections of the banks, in both directions, have an average annual income that does not exceed 15,000 €. The lowest incomes in the city occur in areas of the southern districts of Bilbao, in addition to those in San Francisco, Bilbao la Vieja and Ocharcoaga, with points where its inhabitants do not earn an average of € 7,000 a year.

La Coruña and its center-periphery

The center of La Coruña and its port area are the richest in the city. The residents of the census tracts of the area have average annual incomes exceeding € 15,000, sometimes exceeding € 20,000
.

Residents living further away from the center are less wealthy, as they receive no more than € 15,000 per year per year. In the main cities of the other provinces of autonomy, the economic barrier is also between the center and the periphery, as in Santiago de Compostela or Vigo.

The economic barrier of the port of Las Palmas de Gran Canaria
On the island the concentration of wealth is in the cities, specifically in its ports. The residents of the census sections of the port area of ​​the Canarian capital have an average annual income that, for the most part, is over € 17,000.

This barrier also does not exceed the remuneration of residents of the neighborhood of La Paterna, in the downtown district of the city. With some exceptions, the census tracts where they live are less rich than those of the port. This is something that also happens in Santa Cruz de Tenerife. . (tagsToTranslate) division (t) wealth (t) neighborhoods (t) rich (t) poor

Conor McGregor is more central; and he wants to go back hard