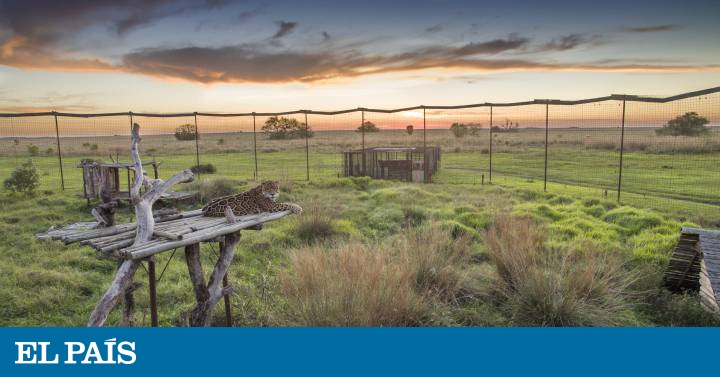 Tania It has three legs. She lost one when she was a puppy, victim of a tiger who attacked her from an adjoining cage at the Batan Zoo, in southwest Buenos Aires. It was a problem among relatives. Tania It looks like an African tigress, but it is a yaguareté (“big cat”, in the Guaraní language), its American equivalent.

Tania is a survivor. He overcame the attack and then the confinement. For two years he lives on San Alonso Island, in the heart of the Iberá National Park (“waters that shine”, in Guaraní), 700,000 hectares of wetlands fed only by rainwater in the province of Corrientes (800 kilometers northeast from Buenos Aires). Tania crossed the island with Chiqui, a male from Paraguay, and was a mother. His two young, Mbarete Y Arami, are the advance of the return of the yaguareté to those virgin swamps, where he disappeared 70 years ago victim of the hunt. The reintegration of Mbarete, Arami and three other adult copies crown seven years of watchmaking work done by Rewilding Argentina, a foundation that works on the rescue of threatened species.

Argentina has been hostile to the yaguareté. There are only about 200 left in Misiones, a jungle province that borders Brazil and Paraguay. In the estuaries of the Iberá, south of Misiones, the yaguareté became extinct in the fifties, a victim of the cattle ranchers who feared for their cows and avid fur hunters. There were then about 1,000 copies. “At the peak of the fur demand, Europe came to pay up to $ 10,000 per animal hunted in Iberá,” says biologist and executive director of Rewilding Argentina, Sofía Heinonen.

Rewilding Argentina is heiress of CLT Argentina, an environmental organization created by the American philanthropist Douglas Tompkins, who amassed a great fortune thanks to brands such as North Face and Esprit. In December 2015, Tompinks died in a boating accident (rowing sport) in Chile and the foundation was left to his wife, Kristine McDivitt Tompkins. It was she who completed Douglas’s dream: restore and donate more than one million hectares of natural treasures to the states of Argentina and Chile, which, in turn, had to turn them into protected areas. Last year, Iberá added 150,000 hectares bought by Tompkins. In these lands, cradle of unsurpassed natural wealth, where lagoons, reservoirs, palm groves, forests and grasslands converge, the Yaguaretés await their return to natural life.

The reinsertion of a species into a new habitat is a methodical work, divided into laboratory phases. This is done by biologists such as Heinonen and Sebastián Di Martino, conservation director of the Rewilding Argentina project. The process begins with captive specimens that will play as reproducers, such as Tania Y Chiqui. Those yaguaretés will never be wild, but their offspring can be. In phase two, puppies grow in pens without contact with man. They are monitored by cameras and fed with live prey, such as capybaras or deer. “The important thing is that they do not associate the man with anything good, so they should not see when we introduce their food into the pen,” says Di Martino.

Phase two also works on specimens that were wild and for some reason ceased to be. On San Alonso Island there are three Yaguaretés arriving from Brazil, two females and one male, who are in this process of rehabilitation to freedom. One of them is Jatobazinho, a wild male that appeared in September north of Corumbá dehydrated and malnourished. The day EL PAÍS visited the corral monitoring center on San Alonso Island, Jatobazinho He slept peacefully under a shed of wood hidden in some bushes, after an abundant lunch.

The biologists of Rewilding Argentina are already in a position to start phase three: the five Yaguaretés will be released in the next months in a 30-hectare pen where they must fend for themselves, without human help. Then the final release will come. Jatobazinho will be “the only free male, and the idea is that it intersects with Juruna Y Mariua”, Two females that together with the young Tania they form the family that will populate the Iberá again, says Di Martino.

The return of the yaguareté will return the balance to the wetland, today saturated with capybaras, monkeys and yacarés (crocodiles), animals that lost their natural predator. “The restoration of the top predator will allow the richness and diversity of the environment to be recomposed and will ensure genetic continuity throughout the country,” says Hainonen. Reintegration, however, is not the main challenge. If the conditions that 70 years ago produced the extinction of the yaguareté in Iberá do not change, the offspring of Tania Y Chiqui He will live very little.

“You have to get people to have a positive economic perception of the yaguareté. If it’s a good thing, it won’t kill him, ”Hainonen explains. The solution is in ecotourism. The Argentine foundation was inspired by the work of the Onçafari, an environmental organization that works in the Pantanal of Brazil, a natural habitat of the Yaguareté in the south of that country. “The key is that the landowner find an economic revenue in the protection of the Yaguareté,” says Leonardo Sartorello, a biologist from Onçafari who traveled to Iberá to share experiences with his colleagues at Rewilding Argentina. “A cow eaten by a yaguareté is worth 250 dollars; A sighting vehicle transports 10 tourists who each pay $ 250 per day. The account is fantastic. The farmer continues to raise his cows, compensates for losses with ecotourism and, most importantly, preserves the yaguareté because he no longer needs to hunt him, ”explains Sartorello.

The Argentine foundation has made great progress on its side of the border. After eight years of work, he has convinced the political power of the importance of the Yaguareté as a tourist attraction in the province of Corrientes. One of the most convinced is Senator Sergio Flinta, president of the Iberá Provincial Committee. “Three years ago, 22,000 visitors entered the park and did so only from Colonia Pellegrini [uno de los pueblos que sirven de “portal” al Iberá]. Today there are more than 80,000, from five different villages, ”says Flinta.

The use of yaguareté as an image of the province promoted the ventures of the rural communities surrounding the estuary. Families who previously barely had a job today give accommodation or offer themselves as a tour guide. It is, basically, to achieve a peaceful coexistence between the Yaguareté and its main predator, man.