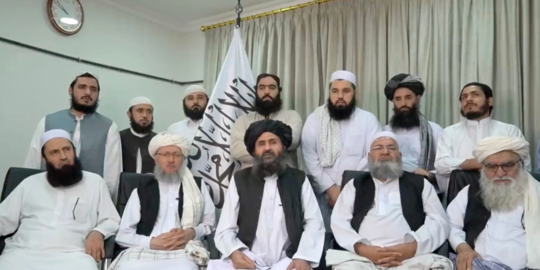 Merdeka.com – There have been reports of divisions among the Taliban leadership, sparking questions about unity within the group that took over Afghanistan last month.

Public skepticism over the group’s association intensified earlier this month, when deputy prime minister Mullah Abdul Ghani Baradar appeared to disappear from the public eye. Then came the report he was killed.

When Mullah Baradar reappeared, he appeared via a pre-recorded video statement. Baradar, who read in his statement, said he had disappeared from public view because of the trip, and he said the Taliban internally loved each other, more than family.

To dispel suspicions about his death or injuries, Baradar was photographed attending a meeting with UN officials on Monday. However, diplomatic and political sources have told Al Jazeera the divisions among the Taliban leaders are very real. These sources added that if this division persists, it will be the Afghan people who will feel the impact.

A writer and journalist who has covered the Taliban for several years said the division was the fruit of the political-military divide. The hardliners felt they had the most merit during the 20 years of fighting.

A political source with long ties to top Taliban officials agreed with the writer and journalist’s statement. He said the impact of the split extended from the headquarters of power to the streets, where Taliban fighters have made their way into major cities and forced to seize the property of former government officials and their families.

“Right now, all they care about is taking people’s cars and houses,” he said, quoted by Al Jazeera, Thursday (23/9).

Several families of the former official told Al Jazeera that Taliban fighters were trying to seize their property such as the houses they rented and their personal cars.

In fact, two days after the Taliban took power, Deputy Minister of Information and Culture of Afghanistan, Zabihullah Mujahid, who is also a spokesman for the Taliban, said his party had instructed Taliban fighters not to enter the homes of anyone, both civilians and military.

In a press conference on August 17, Mujahid also said, “There is a big difference between us and the previous government.”

However, those familiar with the situation, current Taliban leaders face the problem of factions, similar to the government of former President Ashraf Ghani, which fled Afghanistan the day the Taliban captured Kabul.

Currently, the Taliban, the source said, consists of fighters still waiting for the spoils of war versus politicians who want to assuage the fears of the Afghan people and the international community.

Several countries have publicly expressed their unwillingness to accept Taliban rule in Afghanistan, and the five permanent members of the UN Security Council on Wednesday called on the Taliban to be more inclusive.

Afghanistan is facing a liquidity crunch as the country is cut off from international financial organizations, while the United States froze more than USD 9 billion in funds after the Taliban took over the country.

The journalist, who declined to be named for security reasons, said leaders such as Mullah Muhammad Yaqoob, who currently serves as defense minister and is the son of the founder of the Taliban, Mullah Muhammad Omar, is one of the figures representing the hardline, focused Taliban faction. on the military.

Another point the two factions dispute is the role of regional neighbors – Pakistan and Iran – which have long been accused of supporting the Taliban during a 20-year armed insurgency.

Many hardline faction leaders, captured by Pakistan, are suspicious of Islamabad. Some of them are even more inclined towards Iran.

Suspicion of Pakistan was heightened when the head of Pakistan’s intelligence agency, Inter-Services Intelligence (ISI), visited Kabul before the announcement of the Taliban cabinet. The journalist said General Faiz Hameed had called for a more inclusive government, which would allow room for Shia Muslims and women, but hardline factions, who had been suspicious of Islamabad, rejected the request.

For weeks, the Taliban approached former officials such as former President Hamid Karzai, former Chief Executive Abdullah Abdullah and Gul Agha Sherzai, who served as governor of Nangarhar and Kandahar provinces.
At the time, many Afghans assumed these figures would be included in an inclusive government. However, a former diplomat said the hardline faction had said from the start that anyone who spent “even a day” in the previous government would not be granted a seat in the new Taliban-run government.

That is, only the ranks of the Taliban are selected to occupy positions in various ministries and directorates.

“This is indeed the best. The government is not going to be more inclusive,” the journalist said of the lack of ethnic diversity or the involvement of democrats or technocrats in government.

On Tuesday, the Taliban announced additional cabinet members, mostly deputy ministers. The new appointments are seen as part of their efforts to address questions about diversity and qualifications in their government.

The elected officials included figures from Panjshir and Baghlan. Panjshir is home to the National Resistance Front (NRF), which launched its only large-scale effort to try and prevent the Taliban from taking over Afghanistan. Baghlan has also become an enclave of anti-Taliban resistance in several districts over the past month.

The Taliban are cautious about appointing officials to fill three of the new posts to be given to residents of Panjshir, Baghlan and Sar-e Pol, provinces with sizable Tajik and Uzbek populations. Although the group has made room for Tajiks, Uzbeks and Turkmen, there are still no Shiites, Hazaras, or other minority groups in their government.

Its real strength, the sources said, lies among the secret shura (advisory body) in Kandahar, where the group claims its current leader, Hibutallah Akhunzada, is based. This circle is seen as the real decision maker in Afghanistan going forward.

“The government has no power,” the journalist said.

Some Taliban leaders appear disillusioned with their positions in the new government.

Diplomatic and political sources said based on their current actions on the streets of Kabul, there are concerns that regional and personal disputes between the Taliban leadership will lead to fighting or fighting in the capital and other provinces.

“Battles for political seats are one thing, but when their armies start fighting based on their old enmity, nowhere is safe.” [pan]

Also read:
The Style of Taliban Soldiers on a Walk at the Kabul Zoo
Portrait of Afghan Women’s Robotics Team Continues Education in Qatar
At the UN Session, Jokowi Highlights the Fate of Afghan Women and Palestine’s Independence
History of Hostility and Conflict Between ISIS and the Taliban
UN Secretary General: We are on the verge of Hell
Taliban to Reopen High Schools for Girls
FACT CHECK: Hoaxes of Christians in Afghanistan Wrapped in Plastic Until Death

Read Next: The warring factions…