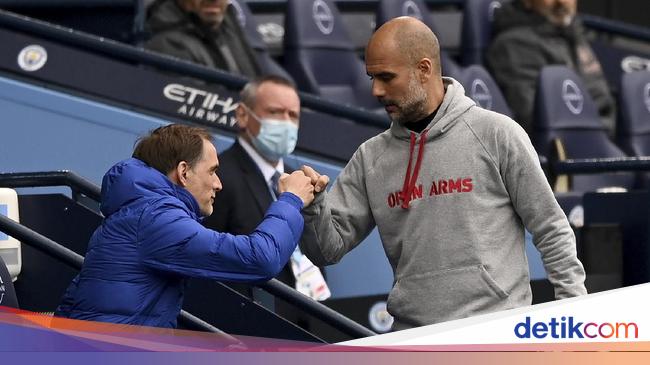 Chelsea vs Manchester City will be Thomas Tuchel vs Pep Guardiola’s fourth duel. The two managers will return to a tactical war.

Chelsea will host Manchester City at Stamford Bridge, in the sixth week of the Premier League, Saturday (25/9/2021). This is the fourth meeting between Tuchel vs Guardiola.

Since being coached by Tuchel, Chelsea have become an unbeaten team against City. Three games were swept clean with a win.

Tuchel’s first Chelsea vs City meeting took place in the FA Cup, last April. Hakim Ziyech brought the Blues to a 1-0 win, with a goal designed from a quick counter-attack.

Then, Tuchel returned to lead Chelsea against City in the Premier League, a month later. As a result, Chelsea won again over the reigning champions of the English League with a score of 2-1.

And the peak of the Chelsea vs City meeting occurred in the Champions League final, last May. Again and again, Tuchel could bring the London club to a 1-0 win, thanks to a single goal from Kai Havertz, through Mason Mount’s long pass.

Of the three defeats, Guardiola admitted that he could not match the tactics of Tuchel, who played a lot long ball [umpan-umpan jauh], second ball [perebutan bola liar], as well as counterattacks.

“I had feelings in the game, and when I saw it again, we played with a lot of courage [dan] with personality,” said Guardiola.

“But, unfortunately, we couldn’t do it. Because of the counter-attacks, long balls, second balls, they were much better than us, they beat us,” he added.

Thomas Tuchel responded to Pep Guardiola’s comments. The German manager said that against City, Chelsea had to play completely.

“If you play against Manchester City you need a very complex performance. It’s not just about long balls and second balls,” Tuchel replied.

“It’s about adversity, about defending, about never being too passive. It’s about everything, because it’s a very big challenge. They put you under so much pressure, and they have so much belief. Pep Guardiola’s team makes you bring out your best.” .

Impact on Cognitive, Diabetic Children Can Achieve with the Help of These 3 Healthy Foods – All Pages