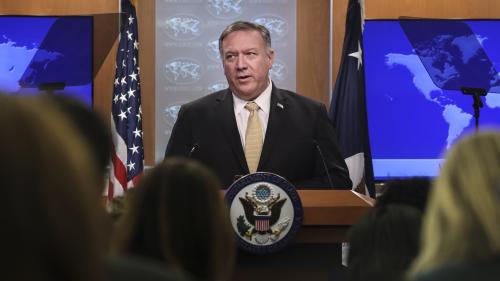 This is a spectacular new decision breaking with the American diplomatic tradition.

The administration of Donald Trump gave, Monday, November 18, another stroke of the international consensus on the Israeli-Palestinian conflict, announcing that the United States no longer considered illegal settlements of the Jewish state in the occupied West Bank .

After the unilateral recognition of Jerusalem as the capital of Israel and the sovereignty of the Jewish state on the Syrian Golan, this is a spectacular new decision breaking with the American diplomatic tradition, immediately hailed by the Prime Minister Israeli Benjamin Netanyahu and denounced by the Palestinian Authority.

"After carefully examining all the arguments of this legal debate", the Trump administration concludes that "The establishment of settlements of Israeli civilians in the West Bank is not in itself contrary to international law"US Foreign Minister Mike Pompeo told reporters.

He was keen to present the announcement as a return to President Ronald Reagan's interpretation in the early 1980s, standing out above all from Barack Obama's previous Democratic administration, which strongly condemned colonization.

But the US policy was actually based so far, at least theoretically, on a legal opinion of the State Department dating back to 1978, according to which "establishing settlements in these territories" was "not in accordance with international law". These settlements in the Palestinian territories occupied by Israel since 1967 are in fact considered illegal by the United Nations, and a large part of the international community sees them as a major obstacle to peace. Mike Pompeo therefore decided that this opinion of 1978 was obsolete.

Around 550 right-wing extremist suspected cases in the Bundeswehr