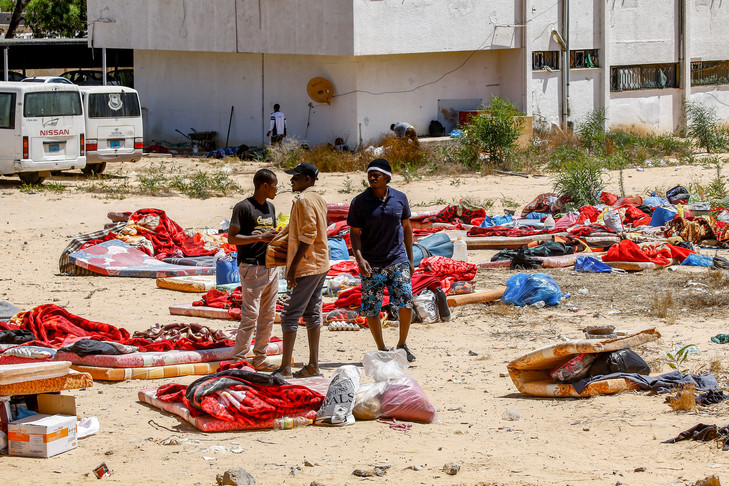 The Cross: What inspired you the Pope's call for the creation of "humanitarian corridors"?

Marco Impagliazzo : The Pope reacted to the recent bombing of a migrant detention center in Libya that killed more than 40 people. This is not the first time he has asked for the opening of a humanitarian corridor from Libya to Europe for the most vulnerable migrants.

He is the only world leader who makes us think about the suffering of migrants in Libya. The bodies of some of these migrants can be seen as marks of the torture inflicted on them, and women also tell of the manner in which they were raped.

Is this corridor project advanced?

Mr. I.: We estimate that there are 200,000 migrants stranded in Libya. Together with the Italian Federation of Protestant Churches, we submitted a project together to the Italian Government two months ago. Which is to create a European humanitarian corridor for 50 000 migrants over a period of two years, starting with a reception in Italy, France and Belgium. It would be a concrete alternative to trafficking in human beings, human rights violations and the journey of death that makes them try to cross the Mediterranean.

In Italy, an ecumenical "corridor" to help Syrian refugees

Two weeks ago we received a written response from the President of the Council of Ministers, Giuseppe Conte. He "confirms his interest in this proposal". We will now go to the ministries of foreign affairs and interior to continue the project. At the same time, our communities of Sant'Egidio in France, Belgium, Germany, Spain and Portugal will initiate steps with their respective ministries to advance the project in their countries.

Libya: migrants in the trap of war

In concrete terms, how does a humanitarian corridor work?

Mr. I.: We have already opened two humanitarian corridors. One from Lebanon for Syrians, the other from Ethiopia for refugees from the Horn of Africa. The first concerned 2,670 people, 500 of whom were welcomed in France, 150 in Belgium, the rest moving to Italy. The second corridor allowed 500 Africans to arrive in Italy.

For these migrants welcomed in Europe, we take care of everything, except, of course, the security aspect, that is to say the issue or not of a visa, which is the responsibility of the country of Home. The selection of the most vulnerable refugees in the camps, transport, integration among Christians in Europe, are organized in connection with Caritas and the conference of Italian bishops. It's all at our expense.

For this new corridor with Libya, we are changing scale. We will need the financial support of the European states, but we are ready to collaborate. The costs relate to the trip, certainly, but especially the reception in Europe which includes housing and education.

To identify the most vulnerable migrants, we are in contact with Caritas Libya, Terre des Hommes and Doctors Without Borders. In order to issue visas, European states have the possibility, in the Schengen area, of issuing visas in the name of humanitarian protection.

Guatemala breaks relations with Venezuela for not recognizing the Maduro Government