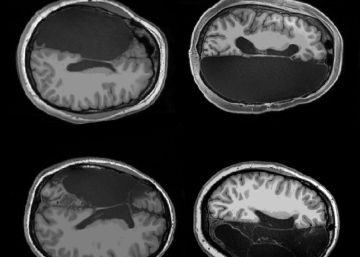 Sometimes we imagine the brain as a kind of computer. As if it were a sophisticated machine, each region is attributed an essential function for life, from memory to language. A breakdown in one of those modules would take away that ability. And sometimes, it is like that. However, some extreme cases show that the brain is a more versatile machine than is thought with many facets still unknown.

An example of these exceptional cases is that of people who live with almost total normality with only half a brain. In some children with very serious cases of epilepsy, who have several attacks a day and in which the origin of the damage is localized, a radical surgery is applied that consists in removing an entire hemisphere of the brain. After the operation, patients lose the mobility of the opposite hand to the extracted hemisphere and the same half of the visual field. However, they maintain the ability to walk, reason or memorize, and although they may sometimes have problems with speech they usually recover it.

Although language is usually placed in the right hemisphere, someone who is removed can recover speech

Studying these exceptional people can help you understand how the brain works beyond the old image that relates regions and capacities. This is what a team from the California Institute of Technology (Caltech) has published its results today in the magazine Cell reports. The researchers recruited six participants in their twenties and thirties who would have had one of their brain hemispheres removed during their childhood, between 3 months and eleven years of age. Together with six other volunteers with both hemispheres as a group to compare, they were introduced into a functional magnetic resonance machine, which allows you to see the inside of the brain in action.

Dorit Kliemann, a Caltech researcher and first author of the article, points out that volunteers with only half a brain had "intact language skills" and almost "could forget their ailment when you met them." That made it even more surprising to see on the scanner that there was only half a brain inside his head.

"The work, with its limitations, is interested in breaking the classical idea that different regions of the brain have specific functions. It does not make much sense to look for the region of language, anger or intelligence. More and more studies they teach us that the brain is a set that can work in many ways, "says Sandra Jurado, a researcher at the Institute of Neurosciences of Alicante (UMH-CSIC). This is seen, for example, in people who have been removed from the left hemisphere , which is described as the hemisphere of language. "These people, although with difficulty, can regain the ability of language, so the right hemisphere can perform those functions," adds Jury.

In addition, Jury mentions a detail that researchers do not stand out in their study because the sample of only six people makes a generalization excessive. “What seems to me most provocative of these results is the idea that in those few patients the regions of the same hemisphere are more connected. This greater connectivity would indicate that they have greater cognitive capacity, that they have greater capacity for social interaction and perform some tasks better than those of the two hemispheres, ”he says.

The authors of the paper affirm that knowledge of the way in which the brain is reorganized to compensate for injuries, even as serious as those of these epileptic children, can help design better strategies to help people with serious neurological damage.

So are hyperflexible robots that can stretch, fold and twist | Innovation

Macron meets Netanyahu and Abbas and goes through East Jerusalem

A French supercomputer with 16 million billion operations per second