Dying in a hospital at the age of 73 In total loneliness. Away from the eyes and without the least care. It was early September at the Conception Hospital in Marseille. A 73-year-old man was found dead in a disused unit of 6e floor, fifteen days after his disappearance was reported by his family. With dementia and living in a retirement home in the Var, Jean came to the hospital for chemotherapy.

When Alzheimer's patients have "desires elsewhere"

After a few hours in the waiting room, he left without attracting the attention of caregivers. "Everyone feels responsible"said a director of the Assistance Publique-Hôpitaux de Marseille (AP-HM), assuring that the establishment did everything it could to find the old man. What did not convince his family, who filed a complaint while the public prosecutor of Marseille opened an investigation for " manslaughter ".

"A need for ambulation, very common in Alzheimer's disease "

How to explain that some elderly patients thus feel the desire to leave, leaving behind a universe a priori benevolent and protective? "Initially, there is often a need for ambulation, very common in Alzheimer's disease"explains Catherine Ollivet, president of the association France Alzheimer 93. " The ambulation concerns between a quarter and a third of people suffering from this disease or related disorders ", says Professor Sylvie Bonin-Guillaume, geriatrician at the Marseille Hospitals and a member of the French Society of Geriatrics and Gerontology (SFGG).

Strolling. Rather a nice word. "Walking without a goal according to one's fancy"says the dictionary. But in the case of Alzheimer's, the term is often synonymous with testing for loved ones. "It is a major factor of exhaustion because often it is at night that the patients begin to wander. And how do you sleep when your spouse spins around the living room table for hours without anything stopping him? "asks Catherine Ollivet.

VIDEO – What is Alzheimer's?

There is no single cause for this wandering. " The main explanation is the alteration of the functions of the frontal lobe, that is to say functions that control our instincts and our primary reflexes. And walking is part of these primary reflexes less well controlled because of the disease, explains Professor Pierre Krolak-Salmon, neurologist and geriatrician at the University Hospital of Lyon, and president of the Federation of Memory Centers.

" Wandering can also be facilitated by the alteration of other functions, including the ability to recognize places and people "adds the doctor. " It can happen that a person wanders home looking for parts that she does not recognize anymore »adds Professor Bonin-Guillaume.

Often, the patient walks aimlessly, as in a form of wandering. "But there are people who tell you," I want to go home "or" My mother is waiting for me ""Catherine Ollivet confides. " We also see people who get up at 1am convinced that it's breakfast time. And who wants to go buy bread as they have done throughout their lives ", adds Professor Bonin-Guillaume, adding that this nocturnal ambulation is often linked to an inversion of the rhythm day / night in these patients.

And there, useless to try to use rational arguments (" Come to bed, you'll be tired … ") or, above all, to prevent ambulation. " This may increase the anxiety and agitation of the patientexplains Professor Krolak-Salmon. As far as possible, it is better to let it go. " While showing constant vigilance. Because the wandering increases the risk of falling and especially of "fugues". So, everyday, relatives sometimes live with the obsession that a door or a garden gate remains ajar, even for a few seconds. "What we advise is to put a curtain in front of the door, to hide it. And to avoid that, at night, the sick person spends hours getting angry on the handle "says Catherine Ollivet.

Walking the day to sleep at night

Tricks, tips. Common sense advice. So, " the more we promote physical activity during the day, the more likely the person will be tired and sleep better at night "says Dr. Adelaide Mauléon, geriatrician at the University Hospital of Toulouse. But some caregivers are so exhausted that they end up wishing to give sleeping pills to the sick person.

" For her to sleep. And me with. " This can lead to an ethical dilemma for the physician, as all recommendations favor non-drug approaches to ambulation. " It is legitimate. Then you have to take into account what people are going through. It's important, too, to preserve caregivers and avoid burnout. ", says Professor Pierre Krolak-Salmon.

Why do patients walk around?

But, more often than not, what plagues the relatives is just to understand a behavior apparently so incomprehensible. To know what motivates this tenacious will to leave. To open the door to leave a house that has sometimes housed 40 or 50 years of living together. Why do patients walk around?

That's the question that Jennifer Bute, a British doctor with Alzheimer's disease, chose to answer in a video (1) posted on Twitter in 2017. "All our life, we walk in new or unfamiliar environments, out of curiosity, to find a shop, buy milk, look for money, find someone, find the locker room, find where we parked the car because that we have forgotten. So when we lose our memory, more and more places appear unfamiliar to us. We forget where the cloakroom is; we want to find our coat. We want to respond to a visual hallucination, try to reach someone outside. Strolling is a familiar activity. There is nothing exceptional. The challenge is to find the cause. " Facing the camera, Jennifer Bute still had these words: "With dementia, we also seek to appease our fear of the future by changing the setting. Being confined makes walking even more obvious. "

Walk around to change the scenery. " Like, perhaps, an ultimate form of expression of freedom "explains Dr. Cyril Hazif-Thomas, psychiatrist of the elderly subject at the University Hospital of Brest and director of Brittany's space for ethical reflection. "Walking is a way of continuing to" lead the dance ", to live according to its rhythm. It is also a form of protest. The refusal to stay on a territory that disease has assigned to you. "

Figures in France: It is estimated that about 900,000 people suffer from Alzheimer's disease in France.
They are expected to be 1.3 million in 2020, given the increase in life expectancy. Out of 25 patients, 10 are men and 15 are women.

And in the world: There are 50 million people with dementia worldwide, an Alzheimer's disease in 60% to 70% of cases. And there are nearly 10 million new cases every year. 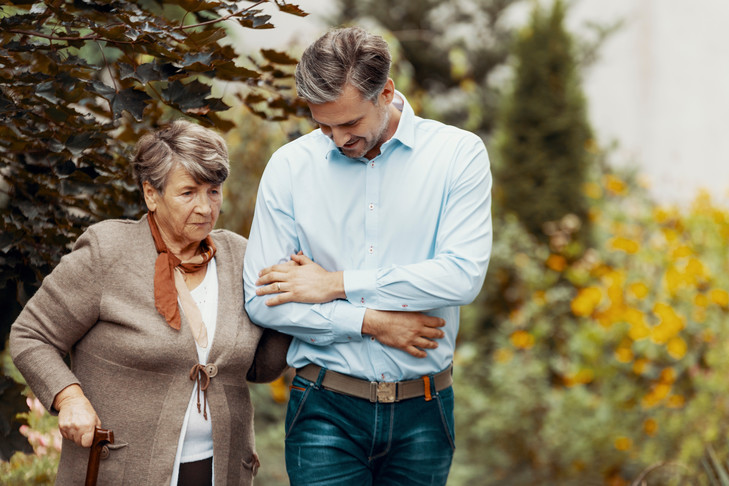 Relatives often need to understand the reasons for this wandering / stock.adobe

"We had to lock the door of his room"
Françoise, daughter of a sick lady

My mother is 91 years old and still lives in her house, in Seine-Saint-Denis, a few minutes from my own home. Her Alzheimer's disease was diagnosed in 2012. A few years ago, she started getting up at night and walking around the house.

She called me several times at 3 or 4 in the morning. The mere fact of speaking to her was enough to calm her down and she went back to bed. But for me, it was exhausting to have to go to work without being able to sleep. Two years ago, the situation worsened.

She was up all night, taking her clothes from the closet and pulling them over her nightgown before trying to get out. " I want to go home "she said.

I then recruited two home helpers who have since taken turns with her. But they, too, ended up running out. And at one point, we were forced to lock the door of his room. On the door, I put a little poster where I wrote: "Mom, you can not get out of this room. It's at night, everyone sleeps in the house. "

Sometimes, just reading the poster, she went back to bed. And sometimes no. For six months, it's been better, thanks to a treatment based on anxiolytics that his neurologist has prescribed. She is less anxious and can sleep better.

"If I divert my attention, she goes away"
Edward (1), husband of a sick

My wife is 81 years old now and we have been married for fifty-eight years. It was in 2014 that the first symptoms of Alzheimer's disease appeared. And since then, the disease progresses steadily.

Three years ago, I had to go with her to the doctor. But she was faster than me. Without realizing it, she opened the garden gate and she left alone. I searched for two hours, completely panicked. And it was finally the foreman of a factory installed not far from us who called me to tell me that she was walking near their premises.

To get there, she had to cross a busy lane, which was really dangerous. Two years ago, it was leaving a supermarket that I lost sight of after a few seconds of inattention.

And it was the gendarmes who found it 1.5 km away. A few months later, this happened again, again on the parking lot of a supermarket. By the time I went to get a shopping cart, she was gone. And it was a shopper who brought her back. When you're at home, you're fine. I hide the beep of the gate and she can walk quietly in the garden. But as soon as you go out, I do not let go of it for a single second. Because if I divert my attention, she goes away.

The dark secrets of "Haurus", the DGSI spoiled policeman