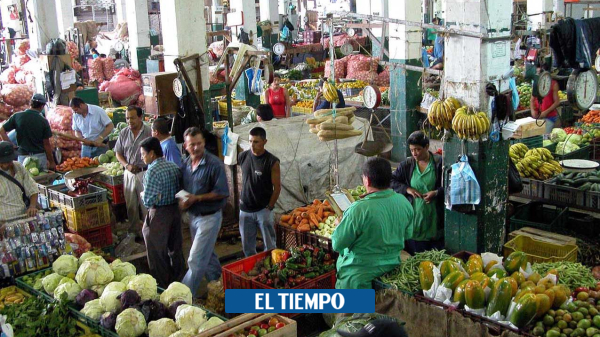 The prices of the family basket rose in May – a full month of national unemployment and lockdowns – six times faster than in the previous 12 months, according to the measurement of the National Administrative Department of Statistics (Dane).

(Also read: The challenge of moving the economy without increasing deaths from covid-19)

The increases in the fifth month of this year were 1 percent, six times the average increases of the previous 12 months, which had been 0.16 percent.

(You may be interested: ‘Negotiation deadlines for unemployment are too cruel with Colombia’)

For the highest-income families in the country, that impact, according to calculations by the statistical entity, was 0.5 percent.

In this way, the blockades have meant an increase in the cost of their family basket for the poor that if it were maintained for twelve months, it would be equivalent to 19.6 percent per year, and for the vulnerable, it would represent a hit of 19.4 percent per year.

During the presentation of inflation data for the fifth month of 2021, Juan Daniel Oviedo, director of Dane, said that the shortage observed last May, as a result of the blockade of the country’s roads, had not been observed since 2019 and was even much higher than the same month of the previous year, when the country was in full quarantine, which explains the increase in food prices, mainly.

In fact, three-quarters of food inflation in May was associated with six products: beef, black potatoes, fresh fruits (lulo and lemon), poultry and eggs, tomatoes and bananas.

The carrot, with 35.86 percent; potatoes, with 31.17 percent, and tomatoes, with 25.66 percent, were among the foods with the greatest variation in their prices last May, according to the Dane.

(In addition: Freight transport, the agreement that was already possible during the strike)

Although the shortage of some basic foods affected almost the entire national territory, Oviedo said that the area with the greatest impact was the southwestern part of the country.

Four cities in this region saw the price of their food rise four and three times more than what was observed in the national average.

Indeed, Popayán, Florencia, Cali and Neiva They were the four cities in the country where this situation was registered in the fifth month of the year, according to the Dane measurement.

And it is that while the average variation of the country’s food inflation was 5.37 percent in May, in Popayán it was almost three times higher, 17.84 percent. In Florencia and Cali it was 16.9 and 15.4 percent, respectively, while in Neiva this behavior reached about 9.1 percent.

Sincelejo, Tunja, Valledupar and Medellín They are at the other extreme of this situation, that is, where, although there were variations in food prices, this was even lower than the average.

By cities, the highest inflation was had by Popayán, capital of Cauca, with 4.5 percent; while in Florencia and Cali it was 4.02 and 2.77 percent, respectively.

According to Oviedo, the high price variation registered in Popayán was influenced by inflation in poultry meat (36 percent), 12 times higher than the national average; in beef (20.4 percent), four times higher, and in fresh fruits (32 percent), five times higher, explained the official.

For its part, Tunja was the territory with the least variation in May, with 0.44 percent. In the meantime, Bogota and Medellin they were in the last places in the inflation ranking for that same month. The Colombian capital had a monthly variation of 0.62 percentage points, while the Antioquia capital had a 0.58 percent.

NFT madness is already a thing of the past