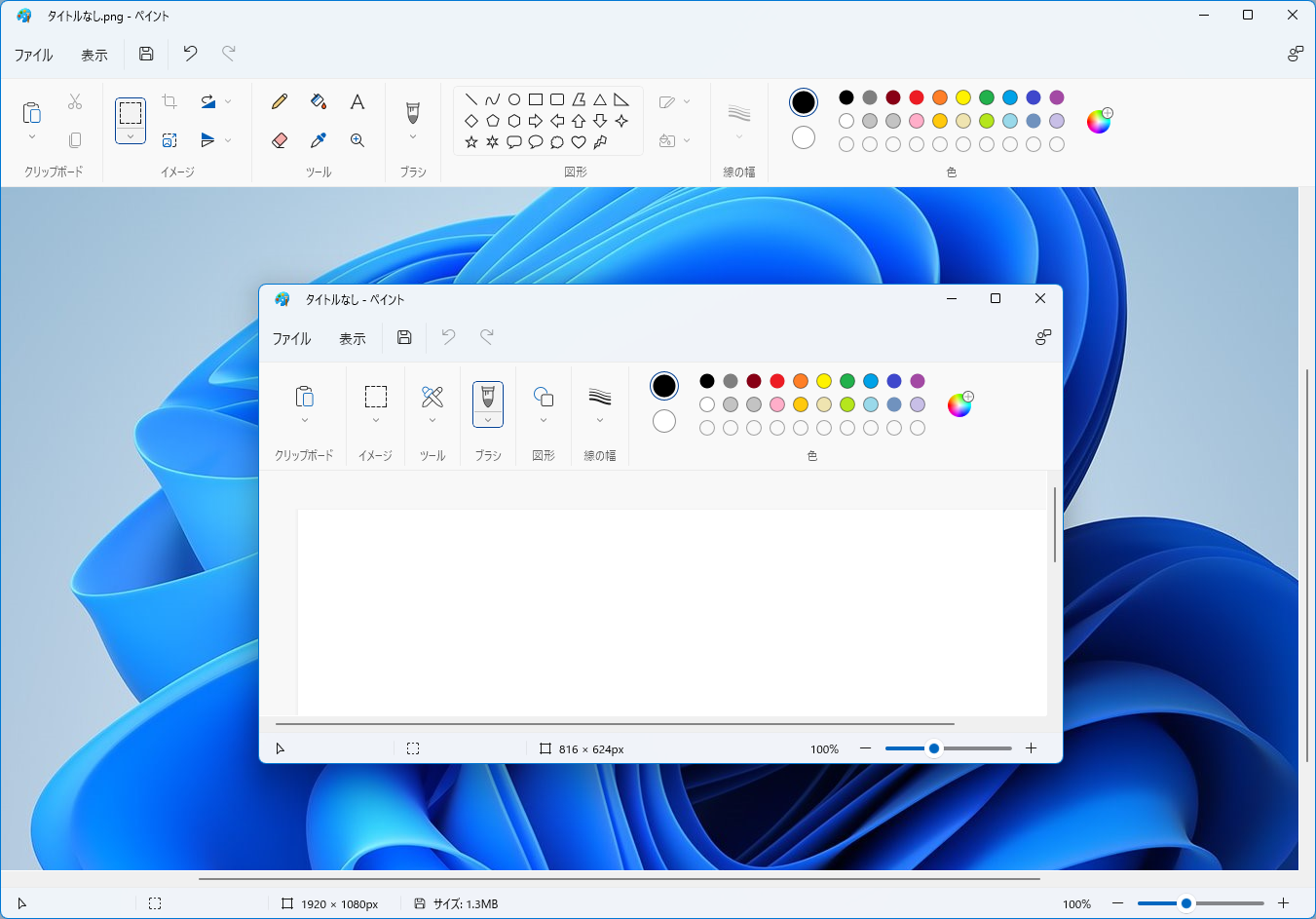 In Windows 11, not only the OS itself but also the standard installed applications have been upgraded. Let’s take a look at the latest version of the standard app, which has become sober and convenient.

Depending on when you installed Windows 11, the app may be out of date. It may not be possible to update the app automatically, so it is recommended that you start the Microsoft Store and execute[Get Updates]or[Update All]from[Library].

First of all, it is important to update the app from the Microsoft store

There are many apps that come standard with Windows, but the following apps have been updated to the latest version in time with Windows 11. Also, depending on the app, replacement from another app is being implemented. Let’s look at specific changes.

Paint is a traditional Windows application that can be said to be an old stock. It was considered to be temporarily abolished, but in the end, it was updated to the latest application in Windows 11 and it will continue to exist.

The main change is the design, which has a simple structure that follows the design rules of Windows 11. The ribbon-style menu has a command bar-style icon display, giving a refreshing impression.

However, functionally, there seems to be no major change from traditional paint. Also, at the time of writing this school (version 11.211.0.0.0), it does not correspond to the theme change. Even if Windows was a dark theme, Paint remained a light theme.

Photo is also one of the apps that has undergone a major redesign. The dark theme is selected by default and is displayed on a black background, but this can also be matched with the Windows theme by selecting[Use system settings]in[Appearance]of[Settings].

Functionally, the photo display function has been changed so that when the selected photo is displayed larger, a list for selecting another photo will be displayed at the bottom of the screen, and from there another photo By selecting, you can now display multiple photos in a larger size.

This makes it easier to select which one to use while comparing two similar photos.

The big point of the clock is that it has a new function called focus session.

Focus session is a function to be used when there is work that you want to concentrate on. When you set the time, the countdown starts, and when it ends, an alarm sounds. You can also set a break time on the way.

These features are gaining increasing attention as features for “well-being,” and Microsoft Viva is also offering more advanced features.

Unfortunately, focus sessions only count down the time and don’t automatically set the Teams status to “Away” or automatically turn on “Intensive Mode” which limits Windows notifications. It doesn’t mean that. In terms of practical use, it’s just another step.

In traditional Windows, there were multiple ways to take screenshots, but in Windows 11, the Snipping Tool basically takes on this role.

You can quickly switch to capture mode by pressing[Win]+[Shift]+[S]specify the full screen, window, range, etc., and shoot the screen quickly. The captured screen is temporarily saved in the clipboard, and then edited and saved on the Snipping Tool.

You can save and process the captured images

Of course, you can also capture using the conventional[Print Screen]and you can also use functions such as automatic saving to OneDrive. Personally, I prefer this one, which saves it automatically.

You can also use[Win]+[G]to capture videos and still images on the Xbox Game Bar.

It is now possible to set themes with the calculator, email, and calendar.

These apps haven’t changed functionally, but the theme can be changed. You can now select light or dark themes individually for each app, and automatically change the theme to match your Windows theme.

Can be changed according to the Windows theme

As for the task manager, the following article is detailed, so please refer to it, but the changes are that it is possible to display the process of Edge in detail and the architecture can be displayed on the[Details]tab. There is a point.

The architecture can now be displayed in detail

CUI environment changed to Windows terminal.You can switch between PowerShell and Ubuntu with tabs, and you can easily change the design in detail.

The terminal has traditionally existed as an app, but has been adopted as a standard command processing interface in Windows 11.

In tab format, you can use multiple commands such as PowerShell, command prompt, Ubuntu (if WSL is installed), etc.

In addition, the settings can be changed in detail, and the screen size and design can be changed. For example, if you turn on Retro Terminal Effects in the appearance of the command prompt, you can create a design with a bleeding impression of green letters, like the old green display around the Apple II.

Chat and video calls are possible from the chat icon

I’d like to take another opportunity to introduce the details here as well, but it’s an app that will be a replacement for Skype, rather than the return of the former Windows Messenger. A chat app based on Personal Teams that can also be used for web conferencing.

By the way, Skype is no longer a standard app. If you upgraded from Windows 10, it still exists, but if you newly installed Windows 11, you need to install it separately from the Microsoft Store.

The Nordics have never been so close to being reborn