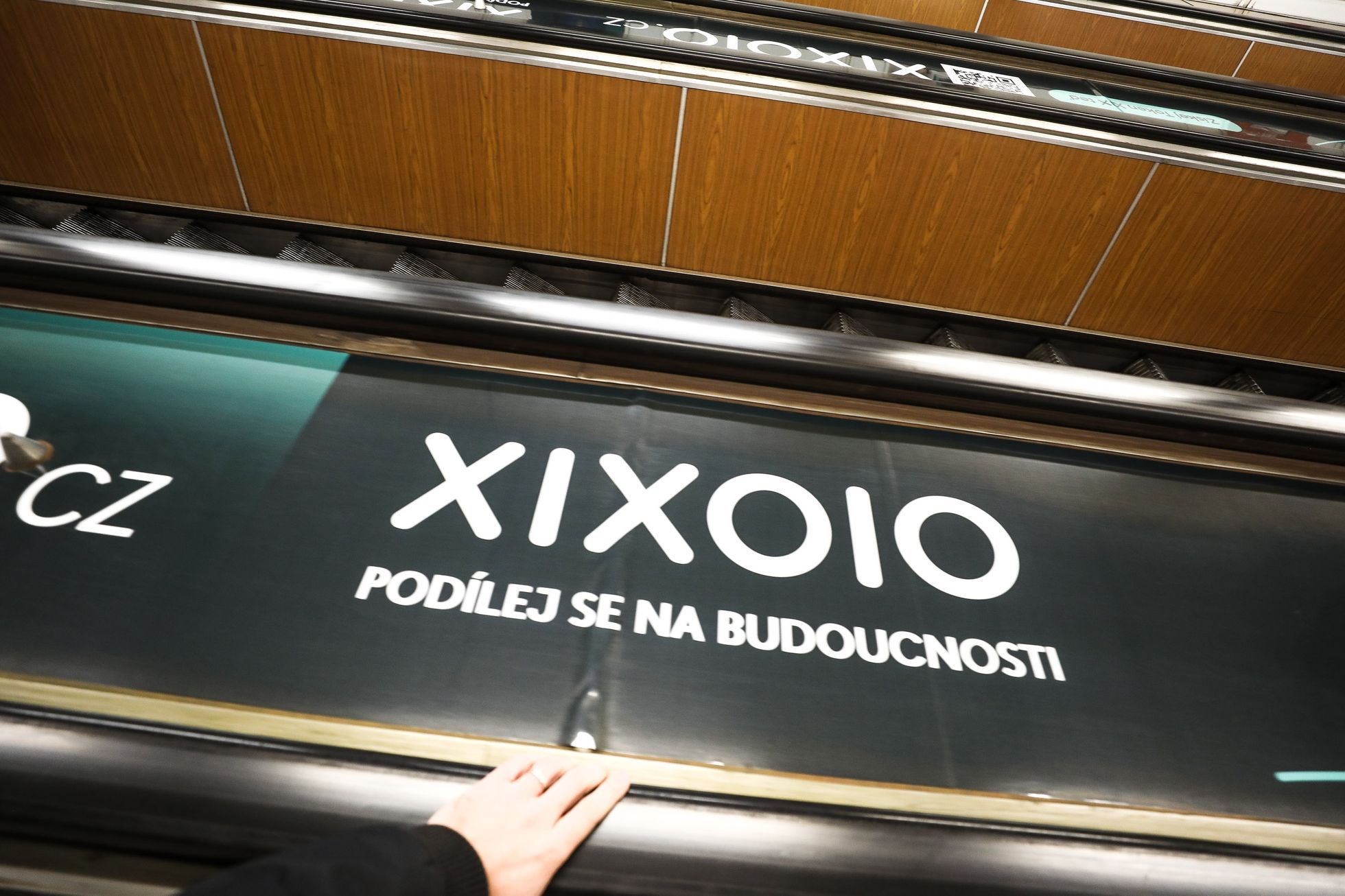 You can see them everywhere, on websites, billboards and on TV. The Xixoio project offers value for money by purchasing digital tokens. Richard Watzke’s company put millions into advertising and sponsors the resounding names of experts. Aktuálně.cz spoke with a number of experts who move in the investment world and follow Watzke’s steps. Their views on the project are critical.

It can be an investment bomb or a terrible mess. Xixoio is a blockchain project based on the idea that clients buy digital tokens and thus finance small start-ups or start-ups. They will help them with their initial capital and thus secure a share of the profit.

On its website, the company of the businessman and former Prague gallerist Richard Watzke describes the entire investment in several steps.

It starts with the company deciding to raise money for its business by tokenization. He connects his data to Xixoio. The algorithm evaluates her health and gives her a basic rating. The company describes its project, creates a plan, defines the amount it wants to withdraw and its goals. If it gains sufficient trust, its tokens will be released for purchase directly in the Xixoio system.

Money from investors is first deposited in the account. Once all the tokens for the first phase are sold, capital is released to the company. How the project is going can be seen in the Genesis blockchain created by Xixoio. Tokens give their holders the right to a share of the success, they can be traded, or they can be held on. The company calls this IPCO, which is a combination of ICO, ie cryptocurrency subscription, and IPO, the primary offering of shares.

“It doesn’t sound bad. Such an investment could be cheaper than standard financing methods. And also faster. Anything that would help move the Czech capital market would be fine. “warns an analyst who did not want to give his name so that his opinion is not associated with the bank in which he works.

According to him, the first problem is that there is no company in the Xixoio system yet. The tokenization of the Artstaq start-up, which trades in art according to the principle of capital markets, is being prepared. But it also belongs to Watzek.

So far, people can only buy XIX tokens belonging directly to Xixoio. The price of the token has recently been around nine crowns, those interested must buy them for at least 10,000 crowns, a lower deposit is not possible. “The value of the token grows depending on the sales, development and construction performance of the Xixoio ecosystem,” the company said.

The price is determined by the company itself

Although people are not yet able to sell the token and thus get their investment back, the company claims that its value is rising. This is criticized, for example, by David Antoš, a principal at Boston Consulting Group in Prague. “The XIX token is not tradable and therefore does not have a market price. Yet Xixoio claims that it increased by 577 percent. How? They just determined the ‘right price’ themselves. They can double it twice tomorrow and it will be just as true.” wrote on Twitter.

According to coinmarketcap.com, which monitors nearly 8,000 different cryptocurrencies and tokens, XIX is not traded on any stock exchange.

“The token price determined by the company is purely speculative. It is built, at least for the time being, on air locks. “I wouldn’t be surprised if the only thing left for people to buy tokens was to remember Xixoio’s megalomaniac marketing campaign,” he added.

However, the company claims that in the spring of next year it will launch its own stock exchange, where the XIX will be tradable. “In general, our criticism is mainly misunderstood or purely purposeful. We are a regular Czech joint stock company, we employ dozens of people, we do not hide in tax havens. The staffing of our governing bodies is transparently communicated and everyone knows who is behind Xixoio,” he said. Richard Watzke.

Experts also dwell on the way the company offers tokens. That is, through a network of merchants, similar to life insurance, for example. Advisors receive commissions of about eight percent of the total investment people bring.

Unlike shares and other securities, Watzke’s company tokens are not subject to the Capital Market Act and their issuance does not require the permission of the Czech National Bank. “Xixoio has not been granted any CNB license to conduct business on the financial market and is not subject to supervision in this regard,” said central bank spokeswoman Petra Vodstrčilová.

Therefore, the company does not want to use terms such as investment and investor. “We don’t have investors. An investor and a shareholder are different concepts. If it’s an investor, it’s a person who puts money in somewhere and expects a return. A shareholder is someone who buys a XIX token, which is actually the key to a house whose floor And when it opens, you will lose the income from renting part of the house, “Watzke explained to the E15 newspaper.

As of November 22, the company registered 6,349 users, almost 2,600 holders of the XIX token, who brought in 249 million crowns. “We target people who understand that the world, and the world of finance, is undergoing dramatic change while not being afraid. We offer people to help us build a groundbreaking project that captures the change that is taking place in the world of finance,” Watzke promises.

On social networks, it is possible to find a number of discussions on the topic of XIX tokens, some discussants are considering the purchase, others are skeptical about the news.

Like the investment expert and owner of Portu.cz Radim Krejčí. “I certainly won’t invest in it. It’s an unregulated investment. The value, the potential return, it’s all arbitrarily decided by Xixoio, and there’s no guarantee that my deposit will be treated. That any return on this project is uncertain “It’s probably the last thing that bothers me. It’s more that I won’t give money to people I don’t know and a project I don’t trust. The basic lesson when investing is that I only invest in what I understand,” says Krejčí.

“It reminds him a bit of the Harvard funds with their tenfold security. It seems like a similar case to me – the company had huge media support, so it looked trustworthy, and promised things that were unrealistic just to count. In the end, it was one big tunnel,” says Krejčí.

Petr Borkovec, CEO of the Partners financial group, also warns against the unregulated market. “Investment substitutes are increasing, it will be a big problem. Inflation is high and people have a lot of money. It is written about how everything grows and how great the crypto is. “There is an abuse of trust funds, where everyone is a manager. The crypt is not just about currencies, but above all a lot of special or risky projects over the blockchain,” he says.

In general, Borkovec warns of the danger that many people are moving from a regulated market to an unregulated one. Mainly because they do not manage to supplement their education, the necessary authorizations, they do not manage the demands of the regulator, the market and clients. They end up with gold or bitcoin sellers, where no one controls them and where they can promise unrealistic returns and marginalize risk.

“Or they end up in a company that sells high-commissioned bonds or trading perpetuum mobile, such as Mr. Andrew Janata’s Growing Way. Or they get recruited to sell XIX tokens that no one supervises. under our law, it doesn’t even exist, “says Borkovec.

Watzke himself makes no secret of the fact that buying tokens from his company is a risky investment. “But we rely on the trend and the fact that we have been on the market for six years. Without risk, nothing new will ever emerge,” he says.

“If someone claims that Xixoio operates in an unregulated environment, this is not entirely true. “Xixoio therefore proceeds in a completely transparent manner and identifies all users of the ecosystem in accordance with the law,” he said.

“I have nothing to do with that”

On his website, Watzke boasts references from well-known names from politics, business and culture. Some can also be found in the Eyes of Others section of his project website. Most evaluate the author of the project positively.

Among them are, for example, former Secretary of Informatics Dana Bérová (non-party member for the US-DEU), Vladimír Dzurilla from the National Agency for Communication and Information Technologies, and theater producer Evžen Hart. The Chairman of the Supervisory Board is Aleš Minx, Chairman of the Board of PPF Group, who, according to the daily E15, is leaving the project. According to information from the company’s surroundings, actor Jaroslav Dušek is also a close friend of Watzke and a supporter of Xixoio.

Watzke refers to other personalities in his texts, publications or videos. But not everyone is happy for the connection with the new project. They usually claim that they met Watzek, some at his conference on blockchain and cryptocurrencies in Prague in 2018, but that’s the end of it all.

“I have nothing to do with it,” Dzurilla, for example, told Aktuálně.cz, who, in his words, had no idea that he was appearing on the project’s website.

Economist Mojmír Hampl, a former vice-governor of the CNB, who also attended the Prague conference three years ago, reacted similarly. “Don’t connect me with that project. I don’t understand their business model, I don’t understand what it’s built on. If someone offered me a token purchase, I would refuse,” he told Aktuálně.cz.

Attorney and insolvency administrator Jan Langmeier, representing people who sent money to the bankrupt investment groups Arca and C2h, also commented. “After reading the product conditions and a quick survey of Xixoio’s activities to date, I would definitely not recommend such an investment to anyone,” he told Peň.cz.cz.

“I don’t take criticism lightly,” says Watzke. “At the same time, it needs to be made clear that it comes mainly from the people we’re disrupting the business to. But as he says, he left these activities and today he is only involved in the Xixoio project.

Your luck today and horoscope predictions Saturday 27/11/2021 on the professional, emotional and health levels

This could be Sears and Kmart’s last holiday shopping season